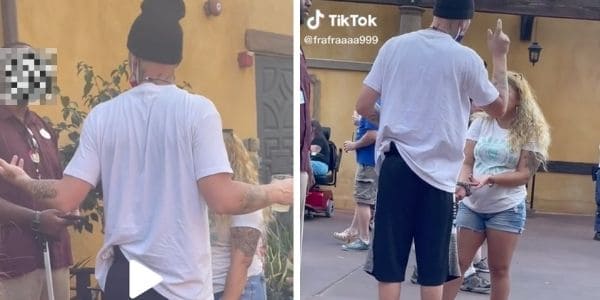 While a visit to “The Most Magical Place on Earth” may seem like the perfect vacation destination, sometimes things can go wrong. Despite all of the fun Guests can have at the Magic Kingdom, EPCOT, Hollywood Studios, and Animal Kingdom, sometimes tensions can rise and Guests can engage in fights with other Guests or even Disney Cast Members.

This is not a common occurrence, and when altercations do break out, please be sure that Disney security is well-equipped to deal with any situation to ensure Guest safety.

In the past, we have seen quite a few fights break out in Disney, from Guests’ fist fighting on Main Street U.S.A. to obscenities being shouted at Cast Members in front of “it’s a small world”. Recently, user @frafraaaa999 posted a heated interaction to TikTok between a Guest and Cast Member at the Walt Disney World Resort. Take a look at the video below, taken at EPCOT.

FYI: I had to stop recording, the guy knew I was on to him…#disneyworld #disneyworldpov #disneyfights #explore

FYI: I had to stop recording, the guy knew I was on to him…#disneyworld #disneyworldpov #disneyfights #explore

They went on to post another video they took of the encounter:

It is unclear what caused the issue, but the TikTok claims the Guest acted “gangster” and “threatened” the Cast Member. We are not sure how or if the issue got resolved. Disney World has a long list of rules Guests must follow unless they want to get kicked out of the Parks. Check out our ultimate list of everything you need to know here. More on Walt Disney World’s rules below:

At the moment, EPCOT is gearing up for the International Flower and Garden Festival, and tons of construction is going on! Spaceship Earth now has the new Beacon of Magic lights illuminating the sphere and Future World is on the road to completion. Club Cool and the new Creations Shop is open to Guests as well as Remy’s Ratatouille Adventure in the France Pavilion! Guardians of the Galaxy: Cosmic Rewind will also debut this year! Plus, you can enjoy the stunning Harmonious show each evening!