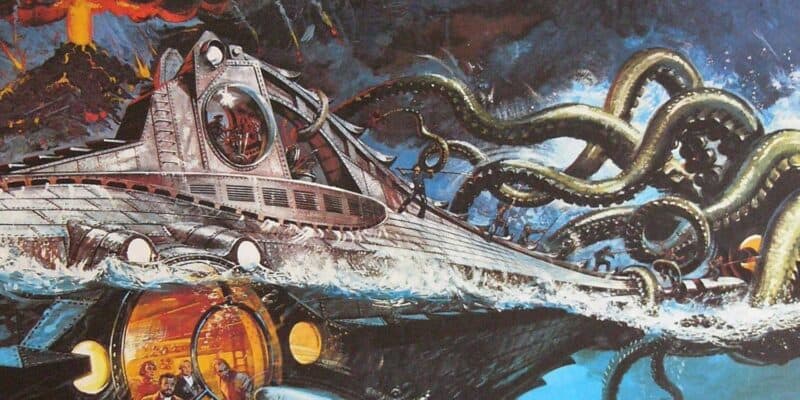 The longtime classic attraction of Magic Kingdom (and Disneyland Park), 20,000 Leagues Under the Sea, has a rich history. Even though its demise at United States Disney theme parks is evident, the attraction still lives on today in other global Disney Parks, hidden gems, and will secure its own Disney+ limited series. If you’re a 20,000 Leagues Under the Sea fan, let’s see where else you can get your Disney Society of Adventurers and Explorers fix with Captain Nemo!

History of Disney’s 20,000 Leagues Under the Sea ride

Disneyland Park hosted “Submarine Voyage” from June 14, 1959, to September 9, 1998, before shutting down and becoming Finding Nemo Submarine Voyage. While the ride debuted after the famous Captain Nemo movie, it entertained Guests with a sense of adventure and a unique ride perspective. However, it was simply the predecessor to Magic Kingdom’s 1971 opening day attraction, 20,000 Leagues Under the Sea. The latter featured IP based on the 1954 ride and combined elements found in Disneyland Park with the film.

Offering rides aboard the USS Nautilus, Disney Park Guests were taken on a tour of the ocean in a submarine, with small windows showcasing a passing seascape while overhead audio described the saga of the crew. The Magic Kingdom attraction was an opening day hit, and still has a seat in the hearts of many Disney Park fans.

The ride began with a top-side loading system, with two sides. Guests had fold-down seats and one porthole each. Wikipedia has a complete point-by-point execution of the ride, which will remind any Guest having experienced the attraction of the entertainment that awaited.

The adventure began as the guests made their way down into the back of the submarine, bending to miss the low-level raised rear hatch, and finding a place on board. Throughout the voyage, an eerie organ version of the Disney film’s main theme would play on a never-ending loop, allowing for a narration backing as well as a piece of stall music if required. Following the standard Disney-style introduction and safety notes from the helmsman, the narration, in the voice of Captain Nemo, would begin.

With the submarine clear of the dock, the diving sequence would begin, with hundreds of air bubbles filling the porthole view, creating the illusion of descent. Once clear, the Captain introduced himself to his passengers, and then introduced them to the underwater plains around Vulcania. In the lagoon, guests could see moray eels, crabs, lobsters, sea bass, clams and turtles as well as a host of smaller tropical fish.

Minutes later, in another tribute to the Disney film, an “underwater party” of divers would come into view, as animatronics wearing replicas of the Harper Goff-designed deep sea diving equipment worked kelp beds and wrangled with rebellious turtles.

With the bubbles from the waterfall at the cavern entrance simulating a surface storm, the Captain would order the submarine down into the depths as a precaution, and the guests enter the show building section of the attraction. Within minutes, the devastation such natural phenomenon can create was made clear with the ominous Graveyard Of Lost Ships, with shipwrecks from various centuries littering the sea bed, guarded by the silent, gliding figures of sharks.

Leaving the destruction behind, the Nautilus would reach the North Pole, circumnavigating the Polar Ice Cap from below the surface, and narrowly avoiding large icebergs stabbing through the water. Venturing deeper, the Nautilus entered the eerie world of the Abyss, where guests viewed examples the many weird and strange species of deepwater fish that thrive in such an environment.

Rising slightly, one of the final discoveries made is the ruins of Atlantis, along with a typical Disney-fied sea serpent, accompanying mermaids, and a treasury bursting with jewels and gold. With the ruins of the ancient civilization soon left behind, the Nautilus would enter the final phase of its journey, with a tribute to the most iconic and memorable part of the 1954 Disney film: the attack of the giant squid. After seeing a much smaller sister Nautilus trapped in the clutches of one such creature (curiously marked XIII on the tailfin), the passenger submarine would be attacked itself by long, thrashing tentacles.

With a final push to the surface, the Nautilus would clear the caverns of the dangerous squid, and enter the safety of the tropical lagoon, on its way towards the dock.

20,000 Leagues Under the Sea has a closure history fettered with disappointment, as the closure was never formally announced before the attraction was demolished. It was an incredibly favorite of those visiting Magic Kingdom, despite its exorbitant costs to maintain and its low ride capacity compared with other attractions. Without notice, the ride was closed on September 14, 1994 for a maintenance period. Though the attraction was set to reopen in 1996, it was instead permanently shuttered.

Three of the fan-favorite submarine vehicles were saved from the fleet and set backstage for Walt Disney World Guests to see. The others were sent to the scrapyard. Two ships were sunk in Castaway Cay for snorkeling and artificial reef development, but one was so badly damaged due to ocean weather it was pulled. The third vehicle was stationed as a backstage item for those on the Backlot Tour at Disney’s Hollywood Studios but was eventually moved to an empty lot. After Disney’s Hollywood Studios was revamped for Toy Story Land and Star Wars: Galaxy’s Edge, the submarine was closeted, only to be pulled out for runDisney events and others.

Meanwhile, the giant lagoon and ride area for 20,000 Leagues under the Sea was renamed “Ariel’s Grotto” and a fountain of King Triton was installed. This lasted until 2004, when the entire area was demolished, making room for Pooh’s Playful Spot (2005). This playground would give way in 2016 for Magic Kingdom’s large Enchanted Forest Fantasyland expansion, including Storybook Circus, Seven Dwarfs Mine Train, Under the Sea: Journey of the Little Mermaid, and Be Our Guest Restaurant, among other attractions.

Imagineers were not without a sense of history, though. They hid a silhouette of the Nautilus in The Little Mermaid: Ariel’s Undersea Adventure in a rock wall, and there is a small carving of the Nautilus inside Piglet’s Treehouse. Trader Sam’s Grog Grotto also hosts a cocktail called (and served in a) Nautilus!

Which Disney parks have the 20,000 Leagues Under the Sea ride?

Thanks to the global Disney Parks like Disneyland Paris and Tokyo DisneySEA, we can get some Leagues flavored excitement. In Disneyland Paris, you can experience “Les Mystères du Nautilus” (that’s French for “The Mysteries of the Nautilus”), which is a walkthrough attraction. It is an updated version of the 20,000 Leagues Under the Sea walkthrough attraction that was at Disneyland in Anaheim, CA in the early 1950s, based upon the film of the same name, before the transformed into the Submarine Voyage. While it’s not the original ride, it’s very similar and will give fans a taste of the film.

Tokyo DisneySEA hosts Guests in a small remote controlled sub developed by Captain Nemo. They participate in a tour to explore the world under the sea, but of course, the remote control goes wrong and as the submarine attempts to rise, the submarine is attacked by the Kraken and loses control, resulting in a detour into an unknown world.

But what about the original ride? For those Disney fans that loved the 20,000 Leagues Under the Sea attraction, there’s still a chance to relive the attraction! Thanks to Defunctland’s virtual reality project, you can now hop back onto the Nautilus submarine ship and sail with Captain Nemo and the crew. An entire YouTube series hosted and created by Kevin Perjurer takes a look at extinct Theme Park attractions like JAWS the Ride, ExtraTERRORestrial: Alien Encounter, Back to the Future, Captain EO, and more. Each episode of the Defunctland series is a history and Imagineering mashup, creating a digital Theme Park out of beloved attractions that once were. Even Disney Hollywood Studios’ Sorcerer Hat gets a VR experience.

For big fans of this classic attraction, Disney+ will be hosting a 20,000 Leagues Under the Sea series entitled, Nautilus. Having been in development for over six years, the show will have a streaming focus and is written and executive produced by James Dormer. Due to start shooting later this year, 20th Century Fox’s version of the Jules Verne classic “steampunk” inspiring novel will be heavily dependent on the tensions of reconstruction after America’s Civil War, according to the film’s director Bryan Singer (X-Men).

Acting as a prequel to the titular, original 1954 film starring Kirk Douglas, Nautilus will “follow Captain Nemo in his youth before he meets Ned Land, as an ‘Indian prince robbed of his birthright and family,’ who is a prisoner of the East India Company – the very same company hellbent on destroying Jack Sparrow in Pirates of the Caribbean – and is determined to right the wrong that stole his life from him. The series will see the mysterious Captain Nemo battling foes and discovering “magical underwater worlds” with his ragtag crew aboard the Nautilus, surely proving to be an adventure worthy of the storybooks,” reports Collider.

For those Disney, fans wishing we still had a science fiction chance to dive deep into the sea, we highly recommend you plan a trip to Disneyland Park and swim with Dory on the Finding Nemo Submarine Voyage, which will give you the physical experience of the Nautilus contraption and a similar 3D puppet-ED aquarium visual of the original 20,000 Leagues Under the Sea attraction.

Are you a fan of the 20,000 Leagues Under the Sea attraction? Leave us a comment below!