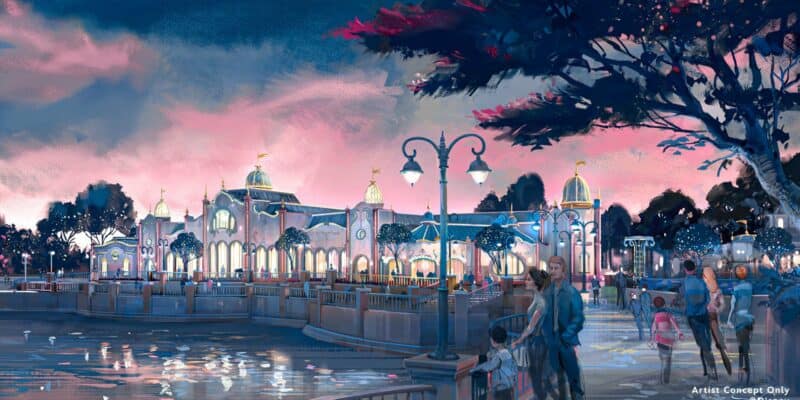 Disneyland Paris is set for a major transformation over the coming years. The Disney Resort, which is currently celebrating its 30th anniversary, is currently undergoing major expansion at Walt Disney Studios Park.

The upgraded theme park will see Disney Parks’ second Avengers Campus launch this year as well as Arendelle: The World of Frozen and a Star Wars Land launch in the future. For Arendelle, Disneyland Paris is well underway with the project and has just released official concept art for the promenade area, including a brand-new character dining restaurant that will take Guests to the icy world of Anna, Elsa, Kristoff, and Olaf.

Progress at Disneyland Paris is moving fast. While Guests flock to Disneyland Park to celebrate the 30th anniversary of the theme park, construction at Walt Disney Studios Park is moving along quickly. This summer, the Disney Park will debut Avengers Campus, only the second Marvel-themed land after Disney California Adventure Park at Disneyland Resort in Anaheim, Southern California.

Then, sometime in the near future, Arendelle: World of Frozen will bring the world of The Walt Disney Company’s megahits Frozen (2013) and Frozen 2 (2019) to Disneyland Paris. Currently, Frozen has a relatively small footprint on the Disney Parks portfolio, with the notable Frozen Ever After attraction being a popular destination at the Walt Disney World Resort in Central Florida.

After aerial shots of Arendelle: World of Frozen broke, the sheer size of the expansion shocked fans with many unable to wait until the land debuts. Now, in an even more exciting update, Disneyland Paris has issued new announcements regarding the long-awaited €2 billion investment into the European Disney Resort.

The announcement came from the official Disneyland Paris news website and stated:

To reach the new area, visitors will take a new landscaped promenade, combining thematic gardens with a green alley. Inviting to reverie and entertainment, this whimsical universe will serve as a transition to the new themed spaces that will border the future lake, and will completely transform the atmosphere of the current park.

Visitors will discover an outdoor family attraction, a pool and a magnificent 250-seat table-service restaurant by the lake. Inspired by Art Nouveau, the latter will offer breathtaking panoramic views of the lake and will offer unique encounters with certain Disney characters.

DLP Report (@DLPReport) showed a closer look at the breathtaking Art Nouveau restaurant about to be built on the shores of the Walt Disney Studios Lake:

Taking a closer look at the just-revealed concept art for a new Art Nouveau style restaurant on the shores of the future Walt Disney Studios Lake. The art shows details of the building but also the lampposts design, garden structures and viewing areas on that side of the water:

Taking a closer look at the just-revealed concept art for a new Art Nouveau style restaurant on the shores of the future Walt Disney Studios Lake.
The art shows details of the building but also the lampposts design, garden structures and viewing areas on that side of the water: pic.twitter.com/K18tsZBQBn

In addition to the construction at Disneyland Park and Walt Disney Studios Park, the retail and food complex, Disney Village, will also be undergoing a major renovation soon.

The news breaks as Disneyland Paris celebrates entering its fourth decade of welcoming Guests to the former Euro Disneyland Park. The momentous occasion sees many new offerings debut, including a pre-show to Disney Illuminations, Disney D-light, as well as Sleeping Beauty Castle show, Dream… and Shine Brighter! and the Gardens of Wonder. The Resort features every style of Disney hotel, and attractions like Phantom Manor, Star Tours: The Adventures Continue, Big Thunder Mountain, and Indiana Jones and the Temple of Peril.

Are you excited to experience this stunning new lakeside restaurant? Let us know in the comments down below!