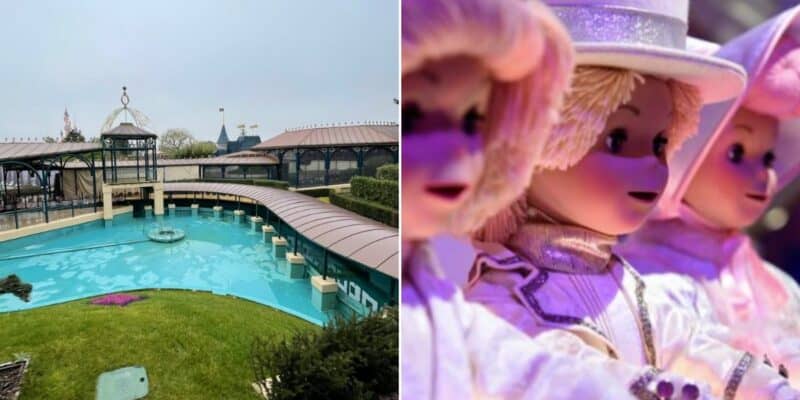 Disneyland Paris is a hub of magical experiences and all things Disney. As one of Europe’s leading theme park destinations, Disneyland Paris welcomes many Guests every year. A big draw of any Disney Park are the attractions that reside in each land, and it just so happens that one iconic Disney ride is now temporarily closed, already looking abandoned.

Disneyland Paris is fast approaching its 30th anniversary celebration. Beginning March 6, 2022, Disneyland Park, Walt Disney Studios Park, and Disney Village will come together to celebrate 30 years of iconic Disney magic. Much like Walt Disney World Resort brought a ton of new experiences like Disney Enchantment, EARidescent costumes, and new merchandise to the Parks, it can be said that Paris will most likely bring out all the stops for their own birthday party.

While the US Parks get to grips with the fledgling Disney Genie, Disney Genie+, and Lightning Lane — Disney World’s and Disneyland Resort’s new Park tool and paid FastPass+/FASTPASS/MaxPass replacement — Disneyland Paris already has such a feature: Disney Premier Access. Guests can pay an additional fee on top of their ticket admission to experience attractions like Big Thunder Mountain in Frontierland, Star Tours: The Adventure Continues, Phantom Manor, and Peter Pan’s Flight. There’s even this Parks version of Space Mountain — Star Wars Hyperspace Mountain.

With Guests able to use this feature to experience some of the more popular thrill rides, they can still utilize the traditional standby queue in order to partake in every attraction Disneyland Park and Walt Disney Studios Park has to offer. One ride that is firmly cemented in the Disney Park lexicon, is the polarizing “it’s a small world”. The animatronic-heavy, gaudy, boat-ride transports Guests throughout the various cultures of the world, all harnessing a key message of unity and togetherness. Despite its symbolism, the attraction is divisive at best because of its theme tune.

For those visiting Disneyland Park from now into the near future, they will not be able to ride “it’s a small world” as it is now temporarily closed for refurbishment. “it’s a small world” closed to Guests on November 29, 2021, and yet even with this hugely popular attraction being closed, lines in Fantasyland surrounding Sleeping Beauty Castle were still extremely long.

DLP Report (@DLPReport) on Twitter has recently shown the current state of the attraction. They said:

Empty basins and no boats at “it’s a small world”. The Attraction is under refurbishment until late 2022.

🔧 Empty basins and no boats at “it’s a small world”. The Attraction is under refurbishment until late 2022. pic.twitter.com/falDVy7iCW

With the cloudy sky backdrop, the emptiness of the fan-favorite attraction feels more abandoned theme park than magical Disney Park. It is not completely clear — at least Disney hasn’t stated why “it’s a small world” is having such an extended closure — but one comment suggests it could be for a pretty big overhaul.

AirMagique (@air_magique) alludes to just what is happening at the Disney attraction.

Those visiting Disneyland Paris next year for their Disney vacation may need to cross “it’s a small world” off of their plans. However, Disney has confirmed that Avengers Campus, the Marvel land opening at Walt Disney Studios Park, will debut next year, meaning that Guests may not get to singalong to one of the most iconic songs in history but they can meet Spider-Man instead!

It’s all systems go at Disneyland Paris. The closure of “it’s a small world” comes amid ongoing strikes and protests at the Disney theme park and its Disney Hotel portfolio. Staff walked out of Disney’s Newport Bay Club leaving Guests without rooms while weeks later protests began in front of Sleeping Beauty Castle from CGT union members, eventually leading to protests in the central hub and Disneyland Park’s entertainment schedule getting altered.

Will you be visiting Disneyland Paris soon? Let us know in the comments down below!