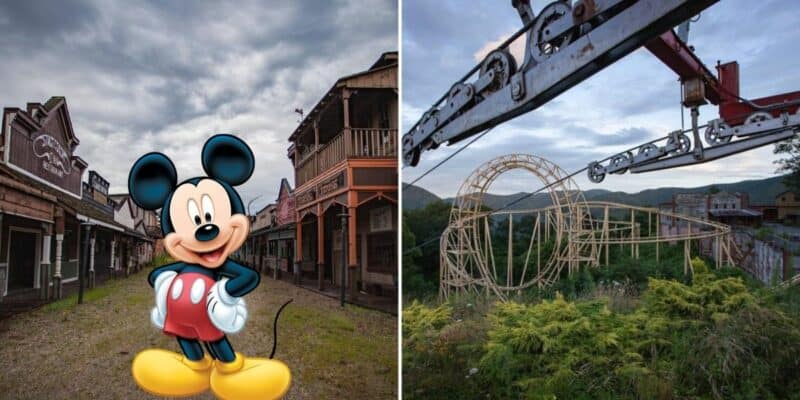 Disney Parks worldwide are known for their magical atmosphere, colorful lands, and exquisite Imagineering. While the following theme park isn’t part of Disney’s portfolio, it was created by a former Disney designer and is now left rotting, completely abandoned, claimed by nature.

Nestled atop a mountain in North Carolina, Ghost Town Village — formerly, Ghost Town in the Sky at Ghost Mountain Park — was first opened in 1961. Built by a former Disney designer, Russell Pearson, Ghost Town Village was a Wild West-inspired amusement park boasting attractions like The Red Devil, Sea Dragon, Monster, and Undertaker over its forty-year existence. It could be found on a ridge in between the Buck Mountain border and the Great Smoky Mountains National Park.

As one of North Carolina’s most-visited tourist attractions, Ghost Town also included a huge double-incline railway and eventually a two-seater chair lift that would transport visitors to the mountain peak where there were over 40 replica buildings forming the Western Town.

In its later years, the theme park saw regular ride breakdowns allegedly due to mismanagement from the park’s owner, RB Coburn. As numbers continued to decline, an incident in 2002 involving theme park visitors getting stranded for over two hours on the chairlift led to Ghost Town’s eventual closure while Coburn listed the deteriorating amusement park for sale.

It remained closed for a further four years, before being reopened by new owners in 2007 but by 2009, due to bankruptcy, Ghost Town once again shuttered. Over the years the once hugely popular Ghost Town in the Sky has gone through many renames and sales. As it currently stands, the newest owners are planning a $200 million investment into the theme park and the surrounding Maggie Valley area in anticipation of the expected boost in tourism. While the aim is to keep the essence of Ghost Town intact, the injection of money is said to include a retail area, a Broadway-style beach attraction, and hotels to cater to visiting tourists.

While the revitalization of the former amusement park happens, one photographer has captured the park in all of its creepy and abandoned glory. Sharing to Instagram, Abandoned Southeast (@abandoned_southeast) has revealed a series of eerie images which show the former Ghost Town in the Sky left rotting amongst nature.

This image captures one of the outdoor coasters standing alone atop a misty mountain.

In another, arguably creepy, image, the remnants of the Western Town can be seen.

I got the horses in the back

You can see some even more eerie photographs via Abandoned Southeast’s website.

Ghost Town in the Sky is just one of many abandoned theme parks. Whether it’s the defunct Disney’s River Country or the almost Disney-like Nara Dreamland, theme parks that never had the chance to open or opened then closed after troubled years, are always eerie and interesting, as though — like Ghost Town’s name — ghosts of visitors or the visitors that never were are scouring the park.

Did you ever visit this ex-Disney designer’s theme park in North Carolina? Let us know in the comments down below!