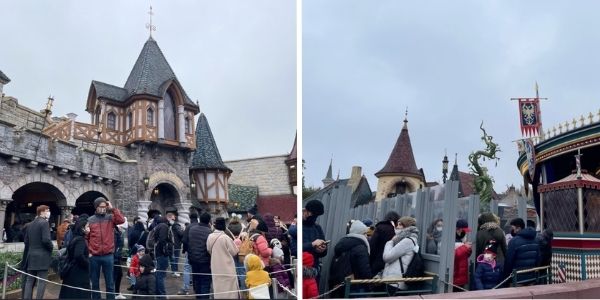 Yesterday marked the indefinite closure of the iconic Disney attraction “it’s a small world” at Disneyland Paris. While iconic in the fact it’s a major part of the Disney Parks experience worldwide, the boat ride is one of the more polarizing parts of the Disney theme parks.

As of yet, there is no confirmed reopening date for “it’s a small world” but that hasn’t stopped Guests flocking to Fantasyland at Disneyland Park.

Disneyland Paris is steaming towards its 30th anniversary celebrations which begin next year in March. With events likely happening across Disneyland Park, Walt Disney Studios Park, and Disney Village, the momentous moment will be the latest in Disney’s celebratory occasions. Walt Disney World Resort in Orlando, Florida, is currently celebrating its 50th anniversary celebrations AKA The World’s Most Magical Celebration throughout Magic Kingdom, EPCOT, Disney’s Hollywood Studios, Disney’s Animal Kingdom, and Disney Springs.

The imminent arrival of Disneyland Paris’ birthday party may be the reason that one popular Disney attraction is taking an indefinite closure.

From November 29, 2021, “it’s a small world” will close at Disneyland Park, meaning Guests will have to opt for other rides such as Frontierland’s Big Thunder Mountain, Space Mountain, or even Star Tours: The Adventures Continue over at Walt Disney Studios Park. Nestled in the grounds surrounding Sleeping Beauty Castle, the Fantasyland attraction is perhaps one of the most well-known in not just Disney Park history, but in the entire theme park lexicon thanks to its repetitive song, gaudy colors, and celebration of cultures from across the globe.

Previous reports indicate that the end date for the refurbishment closure is yet to be determined due to the Disneyland Paris calendar not yet stretching that far into the future. One account did perceive the closure to be extensive due to the walls being placed in front of the attraction, not only suggesting a big refurbishment is underway but also reducing the potential space needed for Park operations.

Yet, despite such a prominent part of Fantasyland being closed at the Disney theme park, crowds are still flocking to Disneyland Park. DLP Report (@DLPReport) captured images of the crowds lining up at the Fantasyland attractions.

Fantasyland without “it’s a small world”. And it’s a weekday

Fantasyland without “it’s a small world”. And it’s a weekday 😬 pic.twitter.com/fZZG0yA8oA

The images show Guests packing out the lines for other Fantasyland attractions even on a weekday. As DLP Report previously stated, the entirety of Fantasyland is likely to be affected from a capacity perspective due to “it’s a small world” and the surrounding areas being cordoned off for the refurbishment.

With all the festivities currently happening at Disneyland Paris, including the all-new Mickey’s Dazzling Christmas Parade the Disney Park is facing strikes and protests due to alleged poor working conditions and understaffing. Housekeeping staff at the Disney Hotel, Disney’s Newport Bay Club, went on strike last month causing significant disruption for Guests staying at the hotel. This action was followed by members of the CGT union protesting in front of Sleeping Beauty Castle, with a later demonstration causing a part of the central hub to be shut down.

At the time of publication, there is no confirmation when “it’s a small world” will reopen at Disneyland Paris. If Guests are visiting Fantasyland while on their Disney vacation they may want to utilize the Premier Access service to ride select attractions like Peter Pan’s Flight instead, for their dose of Disney magic.

What do you hope the “it’s a small world” refurbishment will be for? Let us know in the comments down below!