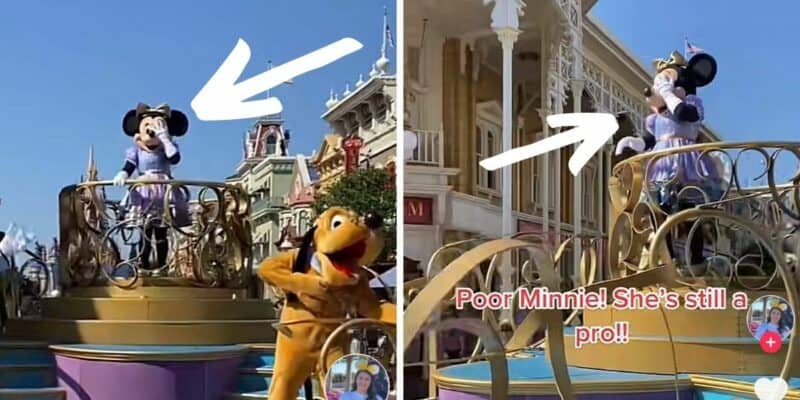 The Disney Parks are filled with magical experiences including character meet and greets and Disney parades. However, sometimes things do not go according to plan and mishaps happen.

Not long ago, we reported on Mickey Mouse losing an eye during a parade at Magic Kingdom. Unfortunately, a similar situation happened more recently — this time to Minnie Mouse.

Just a few days ago, during the new 50th anniversary cavalcade at Disney World, Minnie Mouse was seen holding her hand over her left eye, indicating she had lost it earlier in the route.

In the video, you can also see Disney Cast Members attempting to rush the parade to move quicker in order to get Minnie off stage and into a safe place.

The video was shared to TikTok, which you can see below:

If you are planning a visit to Magic Kingdom during the 50th anniversary, make sure to keep an eye out for the new Mickey’s Celebration Cavalcade as Mickey, Minnie, Donald, Daisy, Goofy, Pluto, Chip, and Dale will all be in their EARidescent outfits, waving to Guests from the floats!

The new “Mickey’s Celebration Cavalcade” includes the Disney World 50th anthem, titled “The Magic Is Calling”, which is also being used during the Beacons of Magic, in performances by the Dapper Dans, and more.

Known as “The World’s Most Magical Celebration,” Disney World began its anniversary festivities on October 1, 2021 to commemorate exactly 50 years since Magic Kingdom first opened its gates in 1971.

Have you seen the new 50th anniversary cavalcade at Magic Kingdom? Let us know in the comments below.