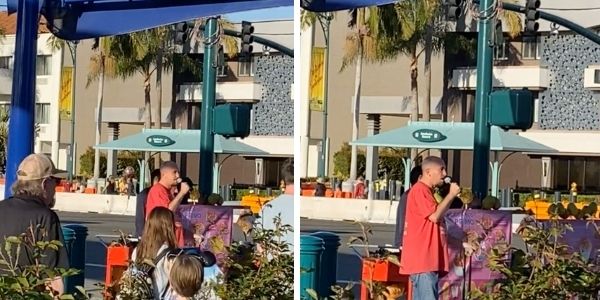 One Guest recently captured a rather intense situation outside of the Disneyland Park involving a “hateful” Guest.

While Disneyland is a fun-filled place that welcomes everyone, there are still rules that Guests must follow. First, the Disney Parks have a specific dress code that they expect all Guests to follow. If a Guest’s outfit is not up to regulation, the Guest will be given a voucher for replacement clothes. If the Guest chooses not to change, then they will be removed from the Park. Guests are also expected to treat other Guests as well as Cast Members kindly.

Foul language and inappropriate behavior are not permitted inside the Disney Parks or Resorts and are another way you can be sure to get kicked out of the Happiest Place on Earth. This can include offensive language of all kinds, including hateful political messaging. An example of this behavior was recently shown on a TikTok where a Guest, @rachelvalenciaa, captured a person just outside of Disneyland spouting what many in the comments called “anti-LGBTQ” speech.

not this right outside disneyland. he thought he ate but he starvin #disney #disneyland #foryoupage #foryou

not this right outside disneyland. he thought he ate but he starvin #disney #disneyland #foryoupage #foryou

Related: Elsa Fails To “Let It Go” Due To Awkward Wardrobe Malfunction During ‘Frozen’

As you can hear in the video, the person says “if you are practicing a life of homosexuality, it doesn’t surprise me you would want to kill yourself”. Obviously, this kind of speech goes against Disney’s policies which is probably why the person remained just outside of the Park. It is unknown how long the person was allowed to stay there or if a Guest complained about them to Disney Cast Members.

For more on Disney World and Disneyland rules, check out our complete list of everything that will get you “kicked out” here.