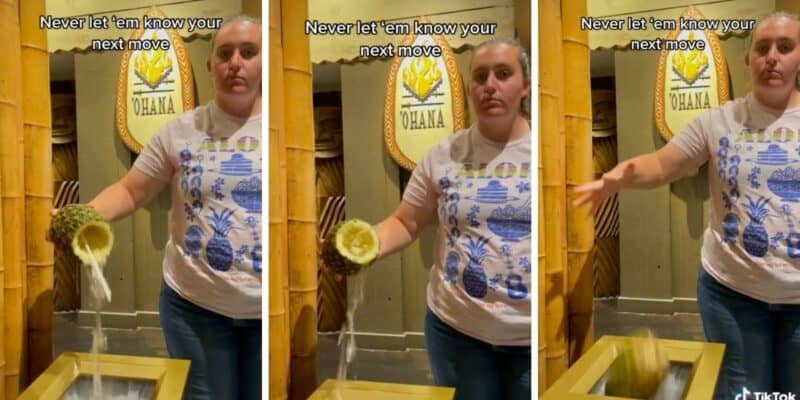 TikTok has quickly become the latest social media phenomenon and remains one of the fastest apps growing in the world. In a recent event, one Disney World Guest “dumped” a “$20 drink” straight into the garbage as part of a TikTok trend.

Related: Disney Parks Shares Its Most Viral TikTok For 2021

The Lapu Lapu is the only drink served at Disney World in a pineapple! It can be found at Tambu Lounge and consists of a blend of Myer’s Original Dark Rum and tropical fruit juices and is topped off with more rum. The drink costs $19.00 before tax.

The Kingdom Krew on TikTik decided to use the pineapple from the Lapu Lapu, and fill it with water and ice so that they could pretend to dump the Lapu Lapu drink into the trash as part of the TikTok trend, #nextmovechallenge — good one!

We have seen other Disney World Guests do unexpected activities for TikTok, which were not as lighthearted — including jumping out of a moving vehicle on Living With the Land in an attempt to steal a cucumber. Please remember, Disney has strict rules and regulations in place to protect Guests, Cast Members, and the integrity of their parks.