Guest Disappointed With $11 Pizza Slice At Disney, "I Feel Ripped Off" - Inside the Magic 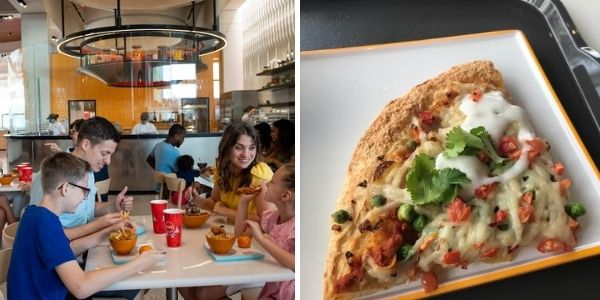 There is so much to look forward to at the Walt Disney World Resort this year. From new and exciting rides like Guardians of the Galaxy: Cosmic Rewind to the hopeful 2022 release of the new TRON roller coaster in the Magic Kingdom, thrill-seekers will have some exciting new attractions to conquer very soon. Rides aren’t the only new thing coming to the Disney Parks in Florida however, several new restaurants, shows, and projects coming along as well.

This is especially prevalent in EPCOT where the Park is undergoing a massive transformation currently. One of the first new additions to this project will be opening soon with some Guests being let in early to try it out. Unfortunately, one Guest had a disappointing experience and shared it online.

A recent post on Reddit sparked some debate about Disney’s newest addition which comes in the form of Connections Cafe & Eatery at EPCOT. One Guest took to social media to share what they thought was a disappointing experience at the new restaurant. The post was accompanied by a picture as you can see below:

In the comment section, several Guests also chimed in with their thoughts and opinions. One user couldn’t believe the price of the pizza ($11), saying it was “greedy” to charge so much. Another user blamed the lackluster portion sizes on Disney CEO Bob Chapk, saying “that’s the Chapek era for you”.

To make matters worse, the Guest who originally ordered the pizza said that it felt and looked as if it had been sitting out quite some time, saying”I’m very disappointed. The photos looked promising, but if this is the quality than you better skip it. Go elsewhere”. The Guest said, “I slightly less ripped off” after receiving a side salad to go along with the pizza but even the salad looked quite “sad”.

The biggest worry is that this quite small slice of pizza is related to Disney’s initiative of shrinking portion sizes which they announced last year. Walt Disney Company CFO Christine McCarthy recently indicated that in order to start cutting costs, Disney plans to begin “reducing portions” at Disney Parks restaurants as it “would be good for Guests’ waistlines.”

While unfortunate, it seems like some Guests are absolutely loving the new restaurant. In another post, Guests raved about one of the burger options on the menu. One user in that comment section said they were slightly disappointed with the burger as it felt like any other burger but the salad was great. As this new restaurant is still approaching its official opening date, hopefully, all the kinks will be ironed out.

As stated earlier, this new restaurant/coffee shop/hangout spot officially opens next Wednesday but has been doing early previews for Guests who happen to be visiting now.

At Connections Eatery, we invite you to savor delicious dishes with family, friends and everyone in between––you can even catch a glimpse of the chefs as they work their magic.Highlights include:

Have you visited Connections Cafe yet? What did you think?