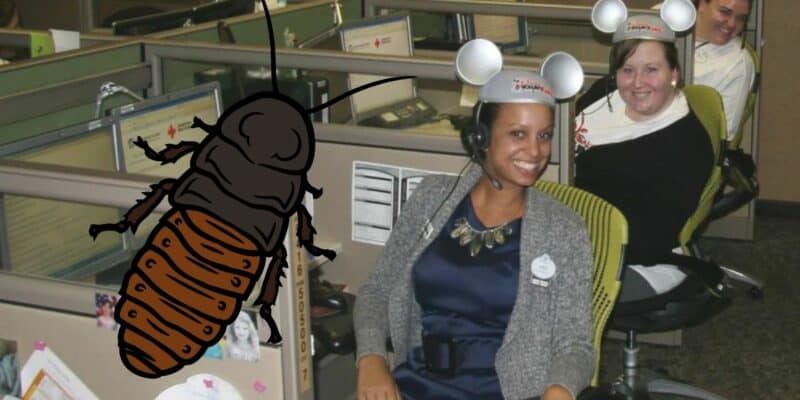 In one direct message, a Cast Member explained how while working at the Disney Reservation Center, the work conditions were not up to par and were quite disturbing.

“It [Disney Reservation Center] has not been updated or deep cleaned for over 20 years. There were 20 years of grime, dust, and buildup embedded in the carpet, walls, and all of the cubicles,” the TikToker said as she read the direct message.

“It was so roach-infested that it wasn’t uncommon to see them scurry across your desk. You couldn’t react or scream because if the Guests on the phone heard you, you could be reprimanded,” she continued to explain.

The TikToker went on to say:

“It was a huge health and safety concern with the air quality, people were getting upper respiratory infections left and right. They finally decided to update the building, but instead of simply closing the location, they forced employees to work in the same rooms they were ripping apart. Imagine how much dust, dirt, and grime was being released into the air and how many employees were forced to breathe that in. Employees who begged for accommodations were reprimanded or let go if they were sick or unable to work. The worst part is they have an entire separate office they could have moved people to, or just temporarily shut down the location.”

In a part two video, the TikToker told another story, explaining:

“One women got repeated phenomena over and over again and was hospitalized. Her doctor request for air quality tests to be done at the DRC. They were never given the results. They repeatedly denied request to work from home for us with environmental allergies and doctor notes. They explain they couldn’t afford to send people home or relocate, but as soon as the renovation was done and the first case of COVID-19 was reported, they sent us to work from home overnight. A lot of us have experience that when working call centers or other corporate environments, they always told us they couldn’t work from home until we could. For a company whose key pilar is safety, it’s a shame the safety of CMs is excluded from that core value.”

What do you think of this Cast Member’s story about the working environments at the Disney Reservation Center? Let us know in the comments below.