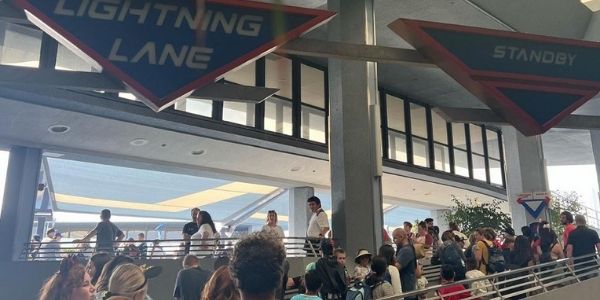 As the debate surrounding Disney’s newest and most controversial system goes on, we continue to see some insanely-long lines.

In the last few years, we have seen lots of changes, updates, and improvements to how the Disney Parks work and operate, From new and exciting rides, virtual queues, and Park reservations, planning for a Disney vacation is a lot more work than it used to be. This is exemplified further by Disney’s newest venture into a “FastPass” system.

Disney Genie is free, but for an extra charge, Guests can upgrade to Genie+, which allows them other access to reservation systems and the option to purchase individual Lightning Lanes for rides, essentially letting them pay to skip the stand-by ques. As stated above, this new system has been met with lots of frustration and criticism from new and long-time Disney Guests and fans.

Disney Genie+ and Lightning Lane were released last year to some criticism and frustration, leaving some Guests feeling confused by the service. In theory, this paid service should enhance Guests’ experience at the Parks, but in practice, it seems to just be an expensive itinerary planner for some, while others love it. These paid services allow Guests to skip lines for a price, meaning Disney now has a financial incentive to have long lines. At Disney World, for $15.00 per day per Guest, you can skip the long standby queue by making a Lightning Lane reservation (new FastPass) and returning at that time. At Disneyland, the cost is slightly higher at $20.00 per hour.

While Disney promises a more efficient Park experience when using Disney Genie+ and Lightning Lane, the company has even backtracked on its description of these new systems, changing their official descriptions online. We also continue to see these Lightning Lane lines get backed up, making lots of Guests wonder if what they paid for was really worth it. This can be seen in a recent photo from @thecalibae on Instagram:

As you can see, this was the Lightning Lane line for Disneyland’s Space Mountain attraction the other day. The attraction used to have a single-rider line but this was removed. This is far from the first time we have seen this happen with Disney’s newest solution to the crowd situation at the Disney Parks. Disney Genie is a free service while Disney Genie+ is a paid service costing $15 per Guest per day. Lightning Lane is a single-use pass that Guests can pay for to bypass standby lines for a specific ride. These prices fluctuate but arrive somewhere around $10-$20. More on how it works below:

You can enjoy a Disney Genie+ Lightning Lane entrance once per day. If you’d like to re-ride an attraction or see a certain show again within the same day, you are welcome to use our regular standby.

It should be noted, however, that the Space Mountain standby queue is loaded with twists and turns, meaning that the line is typically longer, but it is just not visually seen as the Lightning Lane line is a straight shot to the ride, making it seem longer when there are a lot of Guests returning.

Have you used Disney Genie or Lightning Lane yet? What did you think?