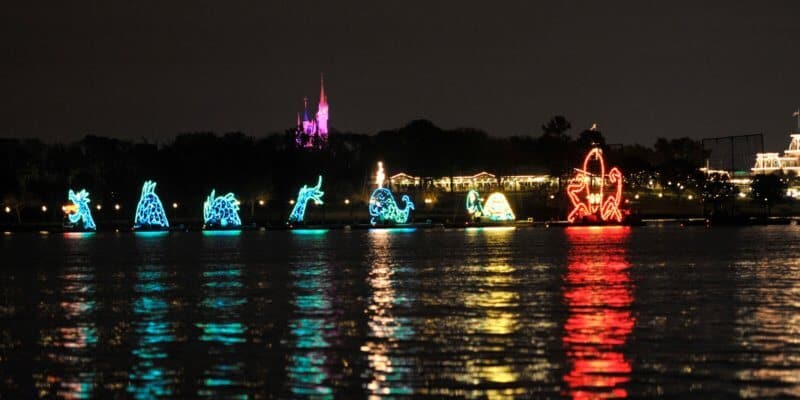 The Electrical Water Pageant, which returned to Walt Disney World in late 2020, is a floating nighttime parade that takes place on Seven Seas Lagoon in the Magic Kingdom area. It showcases several different sea creatures as they light up the lagoon, all synchronized to some familiar songs.

However, last night when Guests were watching the Electrical Water Pageant, they noticed some aspects were missing and that the performance was operating in B-mode.

Disney fan and Twitter user Random Disney Dude shared a video of the Electrical Water Pageant to social media, showing that there were no dolphins, brachiosaurus, crocodile, or Neptune as the performance had to operate in B-mode for reasons unknown at this time. They write:

A first for me tonight, I watched the Electrical Water Pageant operating in “B” mode…no dolphins, brachiosaurus, croc, seahorses, or Neptune #WaltDisneyWorld #Disneyworld

A first for me tonight, I watched the Electrical Water Pageant operating in “B” mode…no dolphins, brachiosaurus, croc, seahorses, or Neptune #WaltDisneyWorld #Disneyworld pic.twitter.com/lB7J540uSV

It is unknown if Disney will continue showing the Electrical Water Pageant in B-mode, but Inside the Magic will update you as we get information.

If you are looking to can catch the show, it can be seen at various times and locations around the Magic Kingdom area. Per the Disney World website:

Disney describes this water attraction as:

Do you love the Electrical Water Pageant? Let us know in the comments below.