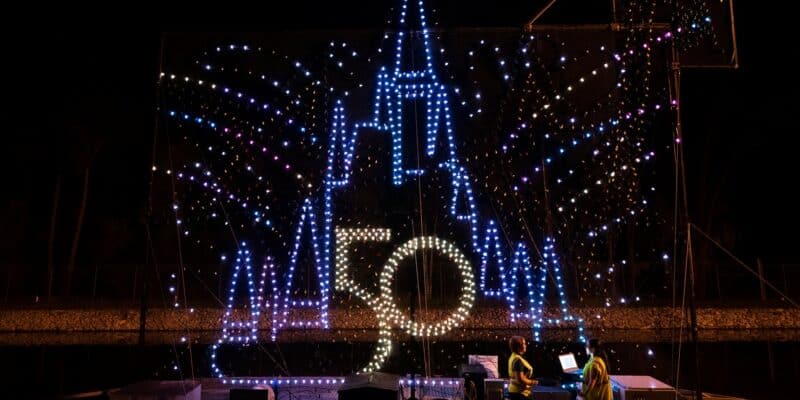 You’re getting quite a makeover to celebrate Walt Disney World’s 50th anniversary. Trailing behind the vintage water floats that we know and love, a new “World’s Most Magical Celebration” float joins the parade!

Announced this morning by the Disney Parks social media channels, we get news of a brand new Electrical Water Pageant float to be added to the theme park show this year! It will also feature part of the new 50th anniversary anthem, called “The Magic Is Calling”, capping off the full traditional nighttime musical processional (this float and music piece will not replace anything) as it takes to the water each night.

The Electrical Water Pageant joins the fun of “The World’s Most Magical Celebration” with new celebratory scenes featuring a version of the celebration anthem song, “The Magic is Calling,” bookending the full traditional show as it sails nightly. #DisneyWorld50 pic.twitter.com/fR5r0jnZna

“The beloved Electrical Water Pageant joins in the fun of “The World’s Most Magical Celebration” with new celebratory scenes featuring a towering castle, swirling pixie dust and a version of the celebration anthem song, “The Magic is Calling,” bookending the full traditional show as it sails nightly across Seven Seas Lagoon and Bay Lake. Stay tuned to the Disney Parks Blog for more on the EARidescent updates to the Walt Disney World Resort classic. #DisneyWorld50″

More on The Electrical Water Pageant

The Electrical Water Pageant returned to Walt Disney World’s Seven Seas Lagoon in late 2020, following the closure and reopening of the Resort. This vintage 1970s electrical delight is a favorite of Park fans and boasted as an attraction in its own right to be seen outside the theme park.

In case you haven’t seen this nighttime show, Disney’s Electrical Water Pageant is a floating parade that takes place on Seven Seas Lagoon in the Magic Kingdom area. You can see this show from all the Seven Seas Lagoon and Bay Lake Disney Resort Hotels (such as Disney’s Fort Wilderness Resort and Disney’s Polynesian Village) as it showcases several sea creatures and a patriotic barge. Disney describes this water attraction on its website:

Do you love the Electrical Water Pageant? Leave us a comment below with where you love to watch the show while you’re on a Disney vacation!

Comments Off on Electrical Water Pageant Gets an Anniversary Makeover