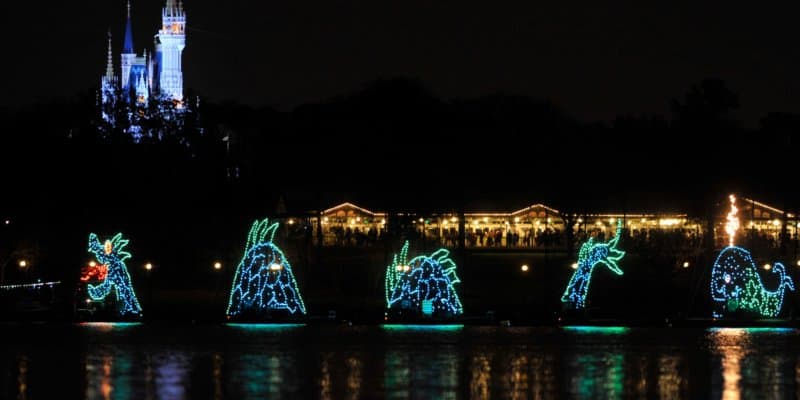 Guests are so excited to see Disney World bring back the iconic water show attraction, the Electrical Water Pageant, as it was temporarily unavailable for quite some time due to the temporary closure of Walt Disney World.

Ever since it made its return on December 20, and has been lighting up the Seven Seas Lagoon once again, Guests have been eager to try and catch this nighttime parade with their friends and family.

In case you aren’t familiar, the Electrical Water Pageant is a floating nighttime parade that takes place on Seven Seas Lagoon in the Magic Kingdom area. It showcases several different sea creatures as they light up the lagoon, all synchronized to some familiar songs. Disney describes this water attraction as:

Guests can catch the show at various times and locations around the Magic Kingdom area. Walt Disney World has recently updated its website and breaks down all the updated information on where to catch the Electrical Water Pageant:

The BEST Spot to Watch?

With five current locations to catch this nighttime electrical water parade, it may be a bit tricky trying to plan where exactly the best spot is. Well, it all depends on your plans, your interests, and the atmosphere you enjoy.

Personally, my all-time favorite spot to watch the Electrical Water Pageant nighttime show is Disney’s Wilderness Lodge, but that is because it is nostalgic for me. When I was little, every single year my grandparents would take us to Walt Disney World and we would stay at Disney’s Wilderness Lodge. So, whenever I think about watching the Electrical Water Pageant, I think about being surrounded by my grandparents, my other family members, and my childhood.

However, I also really enjoy catching the spectacular over at Disney’s Polynesian Resort. Here, you can grab a Dole Whip from Pineapple Lanai or a delicious Mai Tai from Trader Sam’s Grog Grotto and Bar before heading over and grabbing the perfect spot on the beach.

Disney’s Fort Wilderness Resort and Campground also has its perks (including a very underrated beach in my opinion). You can grab a delicious drink from Crockett’s Tavern before heading down to the beach and watching the Electrical Water Pageant with your close family and friends.

If you are looking for a romantic dinner before ending the night by watching the Electrical Water Pageant, I highly suggest heading to Disney’s Grand Floridian and Spa where you can enjoy an elegant meal at Narcoosee’s. The best part is that you can see the water spectacular right from the restaurant! Talk about a perfect date night.

And if you are a night owl, I suggest catching the last viewing of the Electrical Water Pageant at Disney’s Contemporary Resort, where it will begins at 10 p.m.

Where do you think the best spot to watch is? Let us know in the comments below.