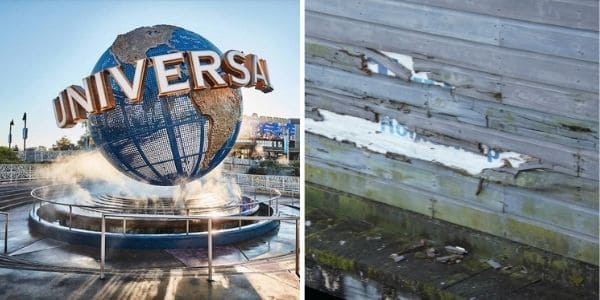 There is no denying a trip to Universal Studios Park in Orlando, Florida can be a fun, thrilling vacation. However, because of the fact that the Park resides in sunny Orlando, this means that the Park experiences some severe heat as well as some intense humidity.

While Universal has ways Guests can beat the heat, with Volcano Bay, a ginormous themed water park opening a few years ago, the same cannot be said for stationary buildings. Harsh weather can sometimes even hurt rides, attractions, and even themed buildings throughout the Park as shown in a tweet from bioreconstruct (@bioreconstruct):

Weathering is causing an exterior to fall apart at the Universal Studios Florida lagoon.

Weathering is causing an exterior to fall apart at the Universal Studios Florida lagoon. pic.twitter.com/YvIoCLiLBz

It should be noted that the building is built on water, which will also cater to the weathering process.

In the past, we have also seen the intense Florida weather affects buildings in Walt Disney World like Space Mountain. As with anything, it is no surprise that parts of Space Mountain are becoming weathered, especially being out in the hot Florida sun day in and day out. We have seen other areas of Walt Disney World experience weathering as well, including the Tangled area in Magic Kingdom and on Spaceship Earth in EPCOT.

At this time, we are unsure if Disney or Universal has any plans to fix the weathering happening with these buildings as they are just some examples of a state-wide issue.

Have you noticed any other spots like this? Let us know in the comments below.