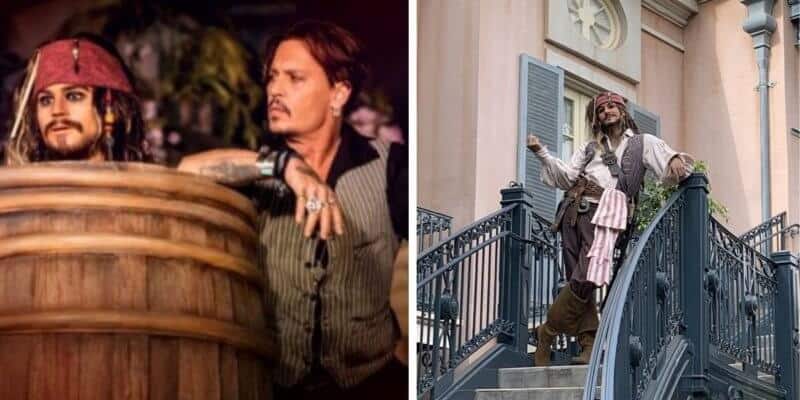 At Disneyland Resort, there is so much to see and do. With the new addition of Avengers Campus at Disney California Adventure, Guests can now enter the Marvel Cinematic Universe and meet iconic characters like Doctor Strange, Loki, Spider-Man, and more. At Disneyland Park, Guests can enjoy Sleeping Beauty Castle, the Matterhorn Bobsleds, Space Mountain, Splash Mountain, and more. There are also a lot of characters, such as the Disney princesses, that Guests can meet when they visit.

Of course, Jack Sparrow is a character, and not directly Johnny Depp, but Disney Parks does model the look, behavior, facial structure, and overall attitude based on the character Depp created. Seeing Sparrow at Disneyland only confirms that Disney is seemingly not planning on removing the character from their parks anytime soon, on the contrary, their actions actually continue to drive the fandom that follows Jack Sparrow.

The similarities are so strong, that some Guests think that Depp has a twin when Jack Sparrow emerges at Disneyland. One Guest saw Jack Sparrow at Disneyland Park recently and said, “I swear Johnny Depp must have a twin brother working for Disneyland…”

One Guest spoke about how amazing Sparrow’s costume is, stating, “What’s crazy to me is how they can get Jack’s wig and clothing to look real and worn-in, but half the princesses are still wearing bright shiny Party City-esque wigs and tulle”, and another Guest said, “Yeah, they really nailed the makeup and costume for this character in the parks. It’s amazing how consistent this character looks.”

More on Johnny Depp and Pirates of the Caribbean

When it comes to Johnny Depp’s involvement in any future Pirates of the Caribbean films, the future seems quite bleak.

After Amber Heard wrote a public letter claiming Johnny Depp abused her, things started to take a turn for the actor. Depp lost a case against The Sun, a U.K. tabloid who sided with Heard’s description of what happened, as well as his appeal. Although Heard continues to stand by her original claims, Depp continues to state that they are false. Neither party has been convicted as innocent or guilty, as the trial for the $150 million lawsuit is ongoing. Elon Musk and James Franco are already set to testify.

Because of the surrounding drama, even though Depp has no conviction, he has taken a large hit to his career. After five films, Disney has given Johnny Depp the boot at Captain Jack Sparrow in the Pirates of the Caribbean franchise. Depp lost a handful of roles, but none had the same outrage as Jack Sparrow.

Disney fans are able to see Depp’s rendition of Sparrow in the films as well as Disney Parks around the globe and have truly grown to love him. When the news was announced, petitions were formed to keep Depp in the role. Since then, some have said they are going to boycott the franchise, especially once it was announced that Margot Robbie would be taking over a similar leadership “Jack Sparrow” role in the female-led spinoff of the franchise. Now, with Pirates of the Caribbean 6 reportedly in the works, we have wondered who could take over for Johnny Depp.

Have you ever met Jack Sparrow at Disney? Let us know in the comments below.