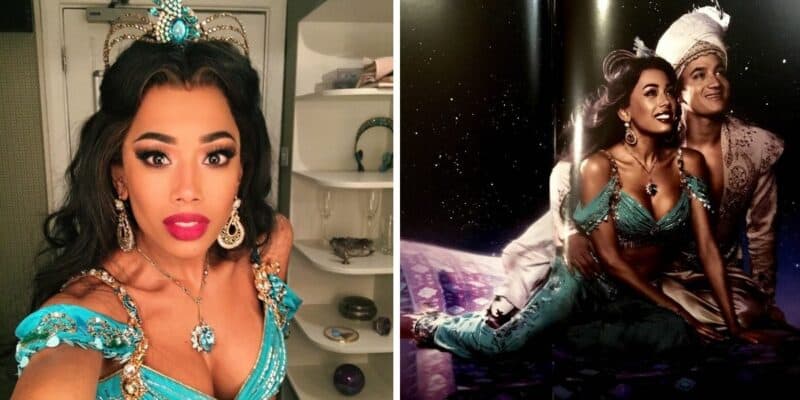 When it comes to lawsuits against the Walt Disney Company, we have seen many go up against the Mouse to receive what they believe is their fair share of compensation for injustices they have faced. From injuries in the theme parks to injuries while on set, we often see Disney either win these battles or settle cases so that things do not hit the media too heavily.

Now, there is a new legal battle that is pinning the West End Broadway star Jade Ewen against Disney. Many may know Jade Ewen as a former Eurovision star and member of the girl group Sugababes. The singer then ended up playing Jasmine in Disney’s West End production of Aladdin. Ewen starred in the musical alongside Matthew Croke, her co-star who played Aladdin. It seems Jade is claiming that due to Croke’s loud voice, she had to strain her vocal cords in order to be heard with him, which over time has caused the injury. Ewen had been cast as ‘Princess Jasmine’ in the popular musical at the Prince Edward Theatre, in Old Compton Street, from April 2016.

Mirror noted that Jade claims she has suffered serious vocal damage while singing the iconic “A Whole New World” duet with Croke. Jade has stated that in order to be able to perform as Jasmine in the Disney musical, she would have to spend her days off in total silence in an attempt to rest her voice. Jade was diagnosed with vocal cord lesions and a vascular polyp. The singer did undergo treatment which fixed the medical issues, however, she still claims that the production of Aladdin has caused her “career-damaging anxiety”.

Below is a photo she tweeted before debuting as Jasmine in 2016.

As Mirror reports, “She is now suing the Walt Disney Company Ltd for more than £200,000 compensation at Central London County Court, claiming the injury led to her foregoing offers of lucrative West End work.” In USD, that total comes to around $262,218.00. Disney is denying that they did anything wrong, or are at fault for Jade’s vocal impairments, stating that Mr Croke was an “experienced and accomplished” stage performer. The case will go to a five-day trial.

Jade’s barrister stated, “Matthew Croke found it difficult to keep harmony if he could hear anyone else singing. To compensate for this, during the duets he sang very loudly so that he could not hear the claimant’s voice.”

This caused the claimant’s voice to be ‘drowned out’ so that she could not hear herself when singing at a volume which was comfortable for her. The claimant was forced, repeatedly during the eight performances per week, over a period of about 18 months, to sing at a louder volume and with greater strength than was comfortable and/or safe for her. Her vocal cords were placed under strain, increasing the risk of damage being caused to her vocal cords. Further, there was something of a vicious circle in that the louder she sang, the louder Matthew Croke sang over her.”

It seems that Jade made numerous complaints about the issue and was told to sing louder, although Disney is disagreeing with this statement. Her new-found anxiety from experience has caused her to turn down lucrative stage jobs. Ewen’s lawyers claim that Disney was negligent in failing to undertake an adequate risk assessment and failing to make sure the sound system was suitable.

TheDisInsider recently shared a rumor that the West End version of Aladdin may be coming to Disney+, as a filmed stage performance — and the theater school girl in me fainted while reading. Aladdin ran at the Prince Edward Theatre from June 15, 2016, until 2019 when Disney’s Mary Poppins took over.

Reportedly, “following Aladdin’s closing, the theater did not go dark, and the sets were not dismantled. This was because a special performance had been scheduled in semi-secrecy, with a cast comprising of members from the London, New York, US Tour, and Australian productions.” TheDisInsider continued to say, “It was said that the recording was to be released in Q4 2020, December to be exact. As you probably noticed, not only does the musical remain unreleased, but it also remains unannounced by Disney. Since it’s unannounced, we can only speculate why it was delayed.”

Considering we have yet to hear about a stage adaptation of Aladdin coming to Disney+, all of this is truly speculation.

We also have already seen major success from bringing stage musicals to Disney+. The excitement that Hamilton brought to Disney+ when it was announced that the original cast, including Lin-Manuel Miranda, was going to be available for the cost of a McDonald’s combo — when Broadway tickets were nearly impossible to snag without selling a kidney — was unmatched. According to Variety, Hamilton drove up Disney+ subscriptions by 74%, and if Disney wants to keep that theater-loving audience, we need more theater.

In the end, this is currently all speculative, but this reporter truly does hope to see Agrabah on stage through Disney+. Considering the live-action version did so well, it seems like the lucrative choice for Disney+ to make!

What do you think of this case? Let us know in the comments below.