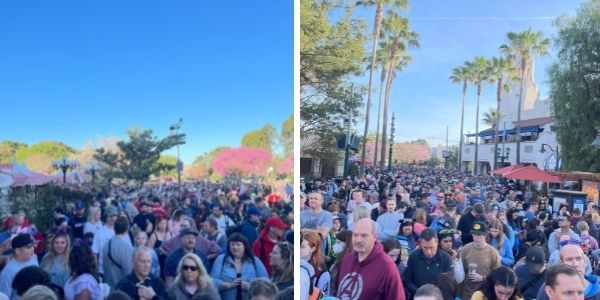 As we have previously covered, the last few weeks at the Walt Disney World Resort in Orland, Florida seems to be a hot spot for vacationers, with all fours Parks reaching capacity multiple times during President’s Day Weekend. Now, with Spring Break amongst us, the crowd situation continues to get worse, with the Parks absolutely slammed with Guests eager to spend a week at Disney and away from school.

Moving on to the West Coast, Disneyland has also seen some insane crowds visiting in the past few weeks. This is incredibly apparent in a recent Reddit post, as one Guest shared the jaw-dropping crowds at both Disneyland and Disney California Adventure for “rope-drop” one morning:

Those in the comments were stunned, sharing their opinions and giving their takes on the current crowd situation. One user said these pictures were “anxiety-inducing”. Another questioned who would actually want to line up in a crowd like that, likening the scene to a “cult”. Another said that these crowds were “intimidating”.

While both Disneyland and Walt Disney World Resort utilize a Park reservation feature, this doesn’t stop massive crowds from forming, especially as Guests wait to get in before the Park actually opens. We hope to see crowds start dying down soon, however, with summer quickly approaching, whatever remains of an “off-season” won’t last long.

Will you be visiting Disneyland soon? Let us know in the comments below.