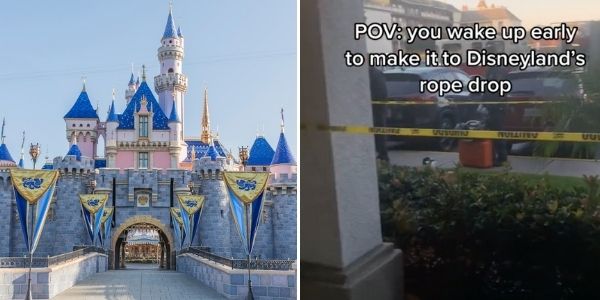 We recently came across a troubling video that was posted on TikTok showing what appears to be crime scene tape outside of a Disney Guest’s hotel room.

In the past, we have covered the good and the bad of the Disney Parks, including fistfights, rude interactions, merchandise fails, racist and insensitive imagery, and less-than-stellar food, but in a recent video posted to TikTok, the situation is a lot more serious than these stories.

As shown in the video, these Guests woke up ready to take on Disneyland when they noticed their day might not go according to plan. See the video below from @alohakairo:

As you can see, these Guests were waking up early with plans to head to Disneyland for rope-drop when they realized they were in the middle of a potentially serious situation. Crime scene tape enveloped their hotel room along with what looks like the rest of the ground floor of the hotel. If you look closer at the video, you can even see what appears to be a potential body laying in the bushes. This sighting would make sense as the Guest claims that a person fell off the top balcony at the hotel with police officers investigating the bushes as well.

We are unsure what happened after this video was posted or if the person who allegedly fell is hurt in any way. While Disney Park veterans have surely encountered a lot of issues over the years of visiting, we would be shocked if anyone had experienced anything like this during their Disney vacation. We can only hope everything was taken care of and that the Guest that fell suffered no injuries. We will update this story if more information becomes available.

Have you ever experienced something as serious as this while on vacation?