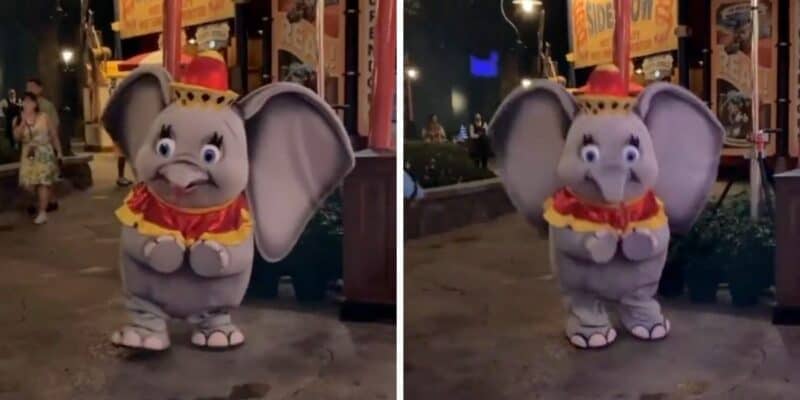 Disney fans love spotting characters around the Parks including Mickey and friends and the Disney Princesses, but one of the things fans love most is spotting a rare character! I’m talking about characters like Robin Hood and Friar Tuck, some of the Disney villains, Clarabelle Cow, Horace Horsecollar, and even Pinocchio!

The iconic flying elephant, Dumbo, from the Disney animated film of the same name, Dumbo (1941), made a surprise appearance at Magic Kingdom last night. Speaking from my own experience, the only time I ever saw Dumbo was during my Disney College Program in 2016 during a DCP special event, so seeing Dumbo out and about at Magic Kingdom is a treat!

Disney fan and Twitter user, off-brand-elsa, shared a video of the surprise appearance, along with the caption:

ARE WE KIDDING ???? @WaltDisneyWorld #disneyworld @DisneyParks

In a different Tweet, the user and fan shared that Dumbo made a special appearance for the Disney Creators Celebration:

he was out for the disney creators celebration !!!!!

he was out for the disney creators celebration !!!!!

Other fans were quick to notice that Dumbo looked a little “off”. Twitter user luckydust11 replied to the video, writing:

How many children did he scare before being escorted out?

How many children did he scare before being escorted out?

And another user, BananaGhostie, Tweeted:

Shoulda put that thing in the haunted mansion.

Shoulda put that thing in the haunted mansion.

btweentheparks noticed that his trunk was a little flat as they replied to the video:

who stepped on his trunk??

who stepped on his trunk??

Despite Dumbo looking a little “off”, we think he is adorable and it’s so great seeing rare characters make appearances like this!

Who do you hope to see at Walt Disney World on your next vacation? Let us know in the comments below.