Disney Character Caught By Guest Behaving Inappropriately - Inside the Magic 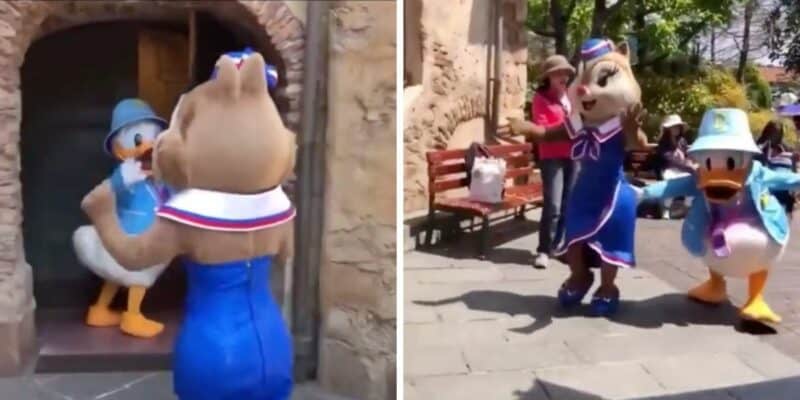 Meeting their favorite characters is definitely one of the most magical things Guests can experience while visiting a Disney Park.

Currently, this can only happen from a distance, as most Disney Parks are still enforcing social distancing, as well as other measures regarding Covid-19. However, this doesn’t mean Guests won’t have the chance of waving at their favorite character during a parade, a show, or one of the many distanced appearances that happen throughout the day.

Although most character interactions happen smoothly, with both Guests and Cast Members making jokes and enjoying the moment, there have been times that have involved inappropriate behavior, in most cases, from Guests. Ironically, in a recent video, it seems a Disney character was caught engaging in such behavior.

Just Disney (@just_disney) posted a video on TikTok where Donald Duck can be seen spanking Clarice before running away into a backstage door. Clarice chases after him and turns back to blow a kiss at Guests before entering the same door.

TikTok users were quick to assume the Cast Member was possibly fired because of their actions, though there is no official information regarding the video. One user jokingly commented, “Welcome to the Wonderful World of Disney.. After Dark..”. In the video, however, we can see both characters remain in character throughout the incident, creating a joke of the situation.

This is not the first time Disney Characters are caught red-handed, as Goofy and Minnie Mouse were also exposed a few years ago being a little too affectionate to each other before being caught by Mickey Mouse himself.

While this is all for good fun, there are, unfortunately, actual cases of Guests behaving inappropriately in the Park, mainly harassing other Guests, as well as situations of violence and alcohol abuse.

It is concerning to see incidents like this can happen even on Walt Disney Company property. However, Disney security is often quick to take action for the safety of their Guests, enforcing the Park security measures. The official Disney site states the following regarding these measures:

Please be aware of the rules and regulations that Walt Disney World Resort sets out before arriving, as breaking them could result in being kicked off property, banned for life, or in certain cases, being arrested.

Please click here to read the rules that Guests must abide by at Walt Disney World Resort.