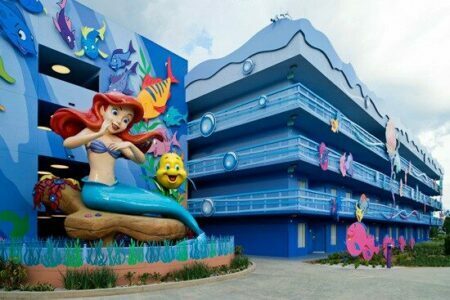 When Guests come to Walt Disney World Resort, they are typically expecting a wholesome, and oftentimes, family vacation. Although not everyone is traveling with someone younger, even adults know what they are getting into when visiting the Most Magical Place on Earth.

There are tons of options to eat and drink, 25 resorts to explore, four Parks to enjoy, shopping, and so much more. Guests visiting are, of course, expected to enjoy their time at Disney World, but must also realize that their actions can affect other Guests’ vacations. On top of that, that there are rules put in place to keep both Guests and Cast Members safe, as well as to preserve the integrity of the magic.

Recently, it seems that a Guest visiting Walt Disney World decided that they wanted to leave explicit and inappropriate photos of themselves in public view at multiple Disney Resorts for other Guests to find. There were two instances in which it occurred, and both times Disney reported the photos to the Orange County Sheriff’s Office. After requesting the records, it seems that the two sheriff reports noted that a photo was found at both Disney’s Art of Animation Resort and Disney’s Fort Wilderness Resort and Campground.

The photo found at Disney’s Art of Animation Resort was found under a napkin in the summer, and most recently, a similar photo was found last week at Disney’s Fort Wilderness Resort. Unfortunately, there are no suspects, and no surveillance footage was able to catch the Guest who decided to leave these photos printed in color with Fujifilm.

Considering both of these Resorts are flooded with children, leaving these kinds of photos in view for them can be very traumatizing, and ruin a family’s vacation. Please be aware of the rules and regulations that are set out by Walt Disney World Resort before arriving, as breaking them could result in being kicked off property, banned for life, or in a case like this, being arrested.

Please click here to read the rules that must be abided by by Guests at Walt Disney World Resort.