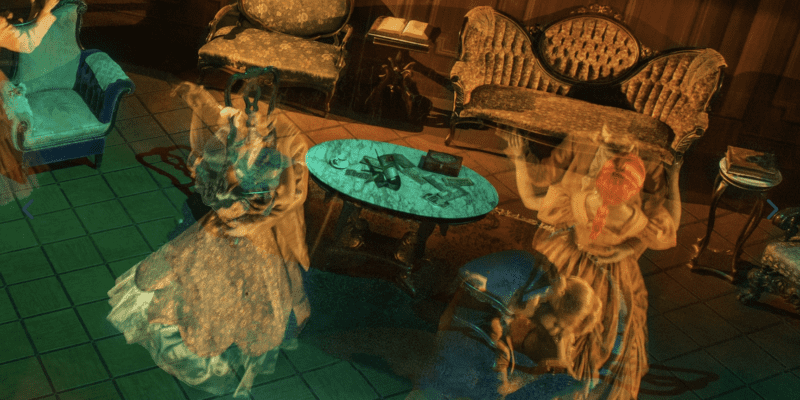 When Guests ride the Haunted Mansion at Disneyland or Walt Disney World Resort, they are often treated to ghoulish delights and stunningly spooky details. Most Guests often enjoy looking at the ghosts, but don’t feel the need to fear them too heavily. It seems that some Guests of the feline nature, however, would approach the attraction very differently.

A fun way to relive the Disney magic while you are not in the Parks is to watch YouTube videos. Whether you are watching a video of the return of Festival of Fantasy at Magic Kingdom, or EPCOT’s new Harmonious nighttime show, there are so many ways that Guests can dive into the magic from the comfort of their own couch. Some Disney fans will watch ride videos so that they can feel like they are blasting down the hills of Splash Mountain, fighting the Resistance on Rise of the Resistance in Star Wars: Galaxy’s Edge, or testing your new car on Test Track. One of the most popular attractions that Guests love to ride from coast to coast, however, is Haunted Mansion.

As noted by Disney Wiki, the ride was “Originally conceived in the mid-1950s by Walt Disney as a walk-through ghost house, artist Harper Goff was tapped to conceptually design the attraction. The house originally had a rural American design and was intended to be at the end of a crooked path that led away from Disneyland’s Main Street, U.S.A.. Eventually, the decision was made to place it in New Orleans Square and thus the mansion’s exterior was themed as an antebellum home.”

When watching a POV of the Disney World attraction, RobertGBP posted a hilarious video of a cat who seems to be named Indiana (perhaps after Indiana Jones). In the video, Indiana is seen clawing at the television, especially when the lit-up eyes are staring through the Mansion’s wallpaper.

Indiana vs The Haunted Mansion

Indiana vs The Haunted Mansion from WaltDisneyWorld

It seems that the ghosts of the haunted mansion should not fear any of the humans taking a tour but if any furry felines sit in the doom buggy, things may take a turn…

Most recently, we reported a change in the Disneyland Haunted Mansion. There are a ton of animatronics in the Haunted Mansion that Guests love, such as the murderous bride, the Hat Box Ghost, the Hitch-Hiking Ghosts, and more. When Guests enter the graveyard, they are met with the gravedigger and his dog, but he now looks like he has aged! The character now has a beard on him, which was a noticeable change for many as he is a standalone statue that Guests see as soon as the enter the graveyard, along with his malnourished-looking dog.

Before Entering the Mansion
A musical crypt, a leaky tomb and a ghostly writer are among the creepy haunts you’ll find outside the main entrance. Explore supernatural hands-on experiences—only at Walt Disney World Resort—while you await your fate inside.
Too Scary?
The Haunted Mansion is dark and contains some mildly frightening scenes, but there is no gore, the ghostly residents are friendly and the ride is slow-moving.

Are you a fan of the Haunted Mansion? Let us know in the comments below!