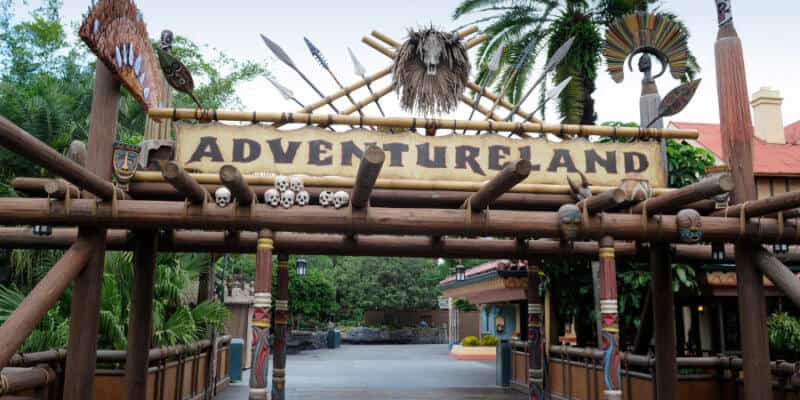 Disney World is the largest theme park Resort in America, with four theme parks, two water parks, a downtown district, 25+ Resorts, and much more in terms of land and roadways. Disney World is around the size of San Francisco, to help give some context. Of course, this means that many other theme parks look to Disney as a leader. But, it looks like one Florida Park just completely swiped their iconic area music!

At Walt Disney World, one thing that Guests love to hear is the area music. When walking into Magic Kingdom, Guests are able to hear the Main Street, U.S.A. music loop, but as they enter Tomorrowland, Frontierland, or any other section of the Park, that music changes. The same happens when Guests enter EPCOT and see Spaceship Earth and hear the music loop play, which is very different from the music loop in each country around the World Showcase. This happens as well in Disney’s Hollywood Studios and Disney’s Animal Kingdom, to help create immersive lands and sections within each Park.

Many other theme parks use music and sound to help immerse their Guests such as Universal Orlando Resort. At Islands of Adventure, there are very different sounds depending on if Guests are in Marvel Superhero Island, The Wizarding World of Harry Potter, Jurassic Park, or any other section of the Park. At Busch Gardens Tampa, however, it seems that the area music may be lacking in originality.

Twitter user Monorail Lime! (@monorail_lime) posted a video of music being piped in at Busch Gardens, as we can see Cheetah Hunt in the background, and claimed the music was Disney’s Adventureland loop.

WHAT 🤣 THIS IS LITERALLY THE ADVENTURELAND MUSIC

WHAT 🤣 THIS IS LITERALLY THE ADVENTURELAND MUSIC pic.twitter.com/xUU88IO6js

When we heard the familiar track that has blasted in our ears while getting sprayed on by the infamous camel and eating a cheeseburger spring roll, we went to look for the Adventureland area music track. Take a listen below!

From the sounds of it, the two loops do sound pretty identical, however, there is a chance there are a few different notes within the song differentiating it.

At Busch Gardens, there are a ton of coasters that Guests can choose from. Tigris is a forward and backward thrill experience, Cheetah Hunt is a smooth animalistic ride, Cobra’s Curse spins Guests around, and more. The most recent addition to Busch, however, has been the newly refurbished Iron Gwazi. The coaster was built in 1999 as just a wooden track, but closed down to be refurbished and redone, into a hybrid wooden/steel coaster. The coaster features a 91-degree drop and an over 200-foot drop. Iron Gwazi’s top speed hits at 71 miles per hour, making it the faster roller coaster in all of Florida.

We recently saw Neil Patrick Harris ride the attraction, and as of March 11, 2022, it will be officially open to the public. At the moment, the attraction is in Passholder previews and a soft opening. Recently it seems that there was an incident on the coaster. A Guest reportedly stuck his hand while riding and now, two beams have been removed from the coaster. At 71 miles per hour, a hit could be extremely severe.

What do you think? Are the area loops the same or similar?