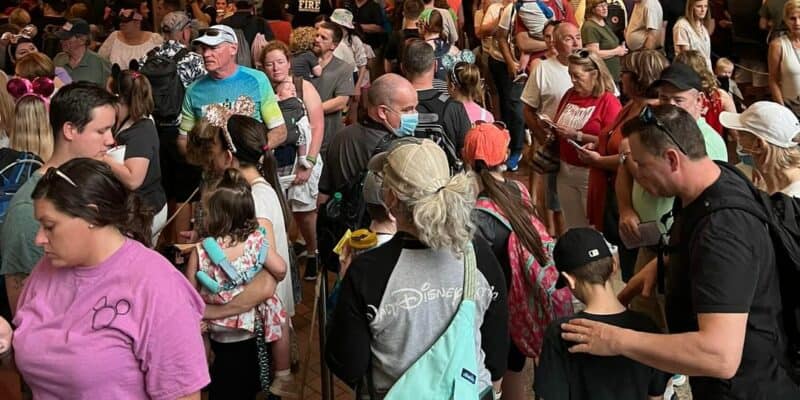 Earlier this week, an incident took place at EPCOT, which resulted in one Guest needing serious medical attention.

The incident took place on Wednesday, March 2. “We were looking at the flower and garden kiosk in front of the American pavilion walkway and a man pushed between my son and another woman,” Jennifer K. told Inside the Magic. “The two of them collided and they both rolled over each other.”

Jennifer said the woman’s phone and food flew out of her hand and her head hit the pavement directly, but what shocked many is that after the altercation, the man got up off the floor and walked away while the older woman was lying on the floor with her hands on her head not moving.

Guests surrounded the woman as they called for medical attention. Luckily, Jennifer told Inside the Magic that she was informed by a Cast Member the older woman was taken to the hospital and is in stable condition.

The theme parks have been very crowded as of late as more families are eager to get out and travel again after the ongoing pandemic shut down the world in 2020, including the Disney Parks for a few months. Now, with more families taking vacations to Walt Disney World, and many Guests utilizing their phones for things like Mobile Order, My Disney Experience, Disney Genie, and Lightning Lane, Jennifer told Inside the Magic she is concerned for the future of the Parks.

“So many people are on their phones between Genie+, mobile ordering….It scares me for the future of the park as more and more things become reliant on mobile apps,” she said.

You can see just how busy EPCOT was on March 2 in the photo below, which was taken by Jennifer of the Living With the Land line.