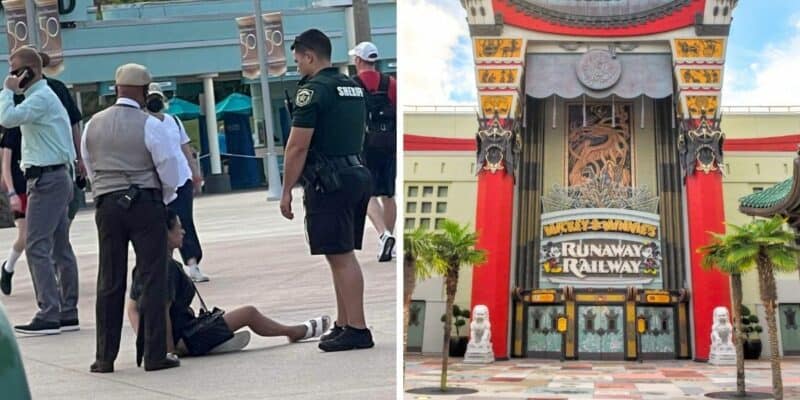 Walt Disney World is known as the Most Magical Place on Earth, but, unfortunately, some “unmagical” things can occur. We have been reporting on rude Guests, line cutters, and even fights breaking out.

Unfortunately, the not-so-magical events continue as this afternoon, Guests witnessed security guards and Cast Members surrounding a women, who was sitting on the ground in front of the Disney’s Hollywood Studios gates and detained in handcuffs.

In the late afternoon of February 22, 2022, a Disney World Guest was walking past the front entrance to Disney’s Hollywood Studios when they noticed a woman on the ground, face down being cuffed by two sheriff officers. She told Inside the Magic that she noticed a handful of bags on the floor with a ton of merchandise inside near the vending machines, but she did not want to be nosey so she continued on her way.

Another Disney World Guest walked past at approximately 3:50 p.m. and saw the woman sitting on the ground already in handcuffs, surrounded by security guards and Cast Members.

The Disney World Guest sent the following image to Inside the Magic, which shows the woman in handcuffs is cooperating at the time of her detainment.

The witness told Inside the Magic that she captured these at approximately 3:50 p.m., when the woman was already sitting on the ground and in handcuffs so it is unclear as to what led to this situation.

She also sent a short video of the detained Guest to us, which you can see below.

Again, at this time we are unsure of why the woman was arrested or what led to this situation, but it appears that no one was seriously injured.

As always, Inside the Magic will update you as we get information on this situation.