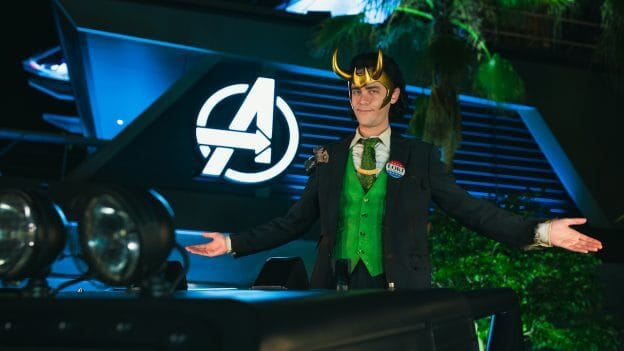 Avengers Campus is also home to many character meet and greets, including characters from new shows such as Shang-Chi, Hawkeye, and Eternals. And during Halloween time, Agatha Harkness and zombie Captain America greeted Guests during Oogie Boogie Bash parties.

One of the more popular characters that Guests love to meet is Loki, who at one point even came out in his prison uniform as seen in the Disney+ Original, Loki.

The Loki meet and greet is so popular that grown women actually ran to Avengers Campus when they found out the Marvel character was out and about.

The video, which was shared to YouTube, shows adult females running through Avengers Campus to spot Loki and wave to him from below. The video is captioned “Grown Women Chase Down Loki | Marvel Avenger’s Campus | Disneyland”.

Within the video clip, you can hear one of the girl’s yell “We missed you!” to Loki, who was standing up on top of the building, to which the Marvel character then waves back at them.

It’s clear that you are never too old to get excited over spotting Disney characters at the Parks.

Have you ever met Loki at Avengers Campus in Disney California Adventure? Let us know in the comments below.

If you want to visit Disneyland Resort on your next family vacation to experience the two theme parks — Disneyland and Disney California Adventure — but aren’t sure where to begin planning, then don’t hesitate to reach out to our friends over at the Authorized Disney Vacation Planners at Academy Travel for a free quote.

Comments Off on VIDEO: Grown Women Chase Down Loki at Disney Park