Universal Orlando Resort has made massive strides in creating an immersive world for its Guests over the last decade.

But, the fun doesn’t stop there.

Universal Orlando Resort is always look for new and innovative ways to add to its Guest experience. Here are the latest and most extensive rumors surrounding the Universal Parks, as well as the highly-anticipated Epic Universe that is set to open in 2025.

For starters, if you’re visiting Universal Orlando Resort in the near future, you might be wondering what there is to do.

Universal has an extensive selection of hotel choices that provide special benefits to its Guests. If you stay at Loews Royal Pacific Resort, Hard Rock Hotel, or Loews Portofino Bay Hotel, you are treated to Universal Express Unlimited, which allows you to bypass the standard line queue at participating attractions.

All Universal Orlando Resort hotel Guests are treated to complimentary transportation to Universal’s CityWalk and the Universal Parks, as well as Early Park Admission to experience The Wizarding World of Harry Potter, and other select attractions before the Park opens. 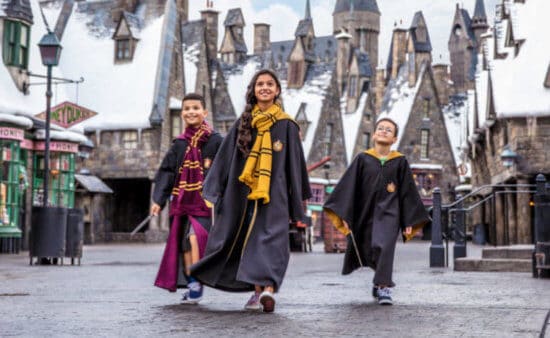 As of right now, Revenge of the Mummy is the lone attraction at Universal Studios Florida undergoing refurbishment, but there is more construction that we’ll get to in just a second. The popular dark-coaster isn’t expected to reopen until late summer 2022.

Right now, Caro-Seuss-El and Poseidon’s Fury are undergoing extensive refurbishments and Universal Orlando has not confirmed when either of those two will reopen.

Revenge of the Mummy being rethemed?

We’ll start with the most obvious. With Revenge of the Mummy undergoing lengthy refurbishment, there are plenty of rumors of what might come to the dark coaster when it reopens. Some have speculated that the ride could be turned into a Universal Classic Monsters theme.

There are posters with several classic monsters hanging on the construction walls outside of the attraction and a Classic Monsters store has taken over Sahara Traders– the Revenge of the Mummy gift shop– temporarily.

At the very least, the expectation is that the ‘hot set’ theme that is currently in place will be rethemed and those beloved Brendan Fraser videos will likely be a thing of the past.

Are the Minions replacing Shrek 4-D?

There are Minion-themed signs all over the construction walls surrounding what used to be Shrek 4-D. While Universal hasn’t confirmed, the idea for this attraction is that it will be a Villain-Con walk-through experience and not a ride. It will be using moving walkway technology. There are also rumors that the minions could eventually take over Monsters Cafe just down the street in the theme park, giving them an entire dedicated area.

Is the end near for Men In Black: Alien Attack and E.T. Adventure Ride?

There have been rumors for years that the next two rides to go might be Men In Black: Alien Attack and E.T. Adventure Ride. At this point, however, it doesn’t seem that Universal Orlando is planning to retheme or close those rides in the near future.

Both have shown their age, but they are beloved classic. Steven Spielberg has an agreement in place that if Universal gets rid of E.T., he will no longer be a consultant. Because of that agreement, we wouldn’t expect E.T. to go anywhere anytime soon.

Universal did cancel its long-running show ‘A Day In The Park With Barney’ last year and there have been rumors that the KidZone, featuring characters like Woody Woodpecker, Fievel, and Curious George could be due for an update. While Universal Orlando hasn’t confirmed this, it would make sense that this area of the Park receive a retheme at some point in the future, but at least for now, it seems safe.

Universal Orlando has filed demolition permits for the Fear Factor Live show and the rumors are that this area will now become another extension of the Wizarding World of Harry Potter. While nothing has been confirmed, this attraction is rumored to be a VR experience that will allow Guests to ‘take flight’ on their own broom. It’s unclear if this will be a part of Diagon Alley or if it will be an extension of the London area at Universal Studios Florida.

Every Attraction Rumor at Universal’s Islands of Adventure

Is a Toon Lagoon retheme coming?

Toon Lagoon has been around since the very beginning at Universal’s Islands of Adventure and the two rides in the area– Popeye & Bluto’s Bilge-Rat Barges and Dudley Do-Right’s Ripsaw Falls– have remained unchanged other than basic refurbishments and a lap bar that was added to Dudley Do-Right’s Ripsaw Falls to ensure Guest safety on the log flume ride.

However, there is a sentiment that these rides could be rethemed at some point in the future, possibly with Toon Lagoon featuring more Nickelodeon, Illumination, and DreamWorks Animation characters. A Secret Life of Pets retheme has been rumored at times.

An update might make sense at some point, but there doesn’t seem to be any current plans in the works and it would seem that both of these water attractions are safe at least until the opening of the Epic Universe.

Jurassic Park River Adventure is another attraction that has been open since the beginning at Universal’s Islands of Adventure. While there are some who believe a retheme of the ride is imminent, it would seem that the Jurassic World Velocicoaster’s opening has delayed that retheme at least for a while.

Jurassic Park River Adventure is iconic and while an update to Jurassic World might come at some point, Universal Orlando seems content keeping the ride as it is for the time being.

Ever since the Walt Disney Company purchased Marvel, there have been rumors of Universal replacing its Marvel Superhero Island. None of those have come to fruition thus far.

Universal has a strong agreement in place to use Marvel characters in its theme parks and is no hurry to make a chance. Right now, Six Flags owns the rights to DC characters in theme parks, meaning that there wouldn’t be a good alternative for Universal if it wanted to stick with the superhero theme and give up Marvel.

Is the Lost Continent going to be permanently ‘lost?’

The overarching theme with the Lost Continent is that it is here to stay at least until the inception of the Epic Universe. Poseidon’s Fury is rumored to be reopening this year and Mytho’s Restaurant is still a popular hit in the area. While there are thoughts this area could be transformed, we wouldn’t expect much to change for the next few years.

The overarching idea with most of these rethemes or attraction closures is that we’ll have to wait until the Epic Universe opens to see what Universal Orlando Resort will do next. While there is a chance that we see some sort of changes before 2025, the belief is that most of the focus in terms of development will be on the new theme park, at least for the next couple of years.

Latest Rumors on the Epic Universe

Though it was originally supposed to open in 2023, the Epic Universe experienced some construction delays related to the pandemic. The good news is that the theme park– which will be Universal’s biggest ever– is expected to open in 2025.

What are the rumored lands in the Epic Universe?

Universal has only confirmed one world to be in the Epic Universe and that is Super Nintendo World. While no official rides have been confirmed, the expectation is that we’ll see a Mario Kart-themed ride and something related to Donkey Kong in this world.

Everything else, as of right now, has been left to speculation.

Universal is expected to include more DreamWorks in the Epic Universe, but the exact attractions or movies that will be highlighted have yet to be unveiled. How To Train Your Dragon, Trolls, Kung Fu Panda, and many more have been mentioned.

Will there be hotels developed around the Epic Universe?

Universal Orlando has already filed permits to begin construction on the hotel that will be at the back of the Park. This hotel will connect to the Epic Universe and will be a unique experience for Resort Guests. At this point, there is no confirmation on what the theme of the hotel might be.

In addition to the hotel that will be built at the back of the Park, Universal is also expected to develop hotels around the Epic Universe. There have already been permits filed for one and there is another plot right next to it that is rumored to be another hotel.

There have also been rumors that Universal Orlando could develop something similar to Universal’s CityWalk around the Epic Universe, but this is only speculation and no permits filed currently would point to this development.

What do you think of these Universal Orlando Resort rumors? Let us know in the comments!

Comments Off on Every Rumored Attraction Coming to Universal Orlando Resort