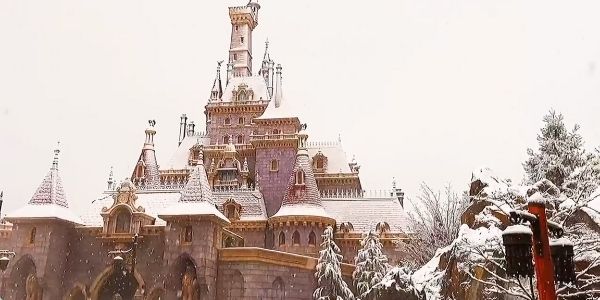 Nothing is as magical as the Disney Parks and Resorts. From Walt Disney World and Disneyland to the international Disney Parks, a vacation at any of them is sure to be magical. One thing that can make these trips even more magical is if you’re lucky enough to get to see it snow.

While it’s a long shot to see snow in Disneyland and Walt Disney World due to them being in Southern California and Orlando respectively, at the international Parks snow is a lot more common.

A recent video posted to Twitter showed how beautiful Tokyo Disney’s Castle is during a big snowfall. See the full video from @mickeymania1988 below:

This isn’t the first time we’ve written about it snowing in the Disney Parks, we recently got to see snow completely cover Splash Mountain at Tokyo Disney Resort as well.

The Tokyo Disney Resort recently announced that Easter festivities would return to the Park this year. Here Guests can experience a ton of fun activities and celebrations. More on that below:

At Tokyo DisneySea, guests will be able to enjoy colorful decorations and paintings inspired by springtime flowers and animals at Via Paperino in Mediterranean Harbor from April 1 to June 30. In addition, merchandise items themed to spring at Tokyo Disney Resort will be offered. Also perfect for spring will be the cherry blossom-themed menu items at restaurants offering “Seasonal Taste Selections” in commemoration of the 20th anniversary of Tokyo DisneySea. It is also important to note that Guests will be able to purchase exclusive merchandise during this time. More on that below:

Have you ever been to Disney while it was snowing? Let us know in the comments below!

Comments Off on Disney Castle Left Covered After Huge Snowfall