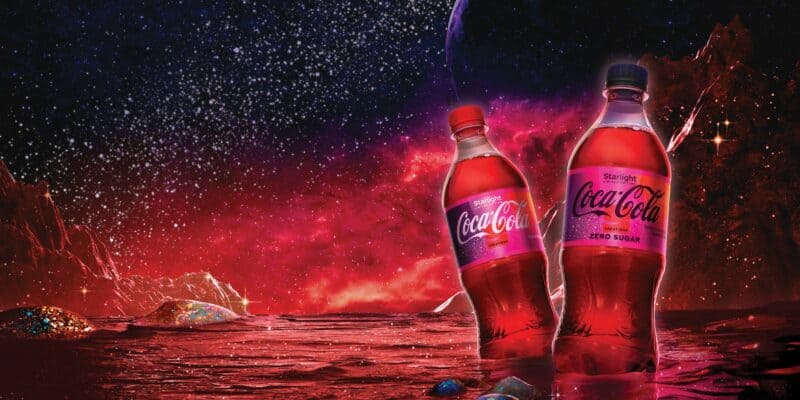 If you’re a Star Wars fan, you’ve probably wished more than once that you could travel to a galaxy far, far away for a libation at the cantina on Mos Eisley, maybe with Han Solo sitting across the table from you.

While Star Wars: Galaxy’s Edge at Walt Disney World Resort and Disneyland Resort comes close to transporting Guests to the Star Wars universe with Oga’s Cantina and the milk stand — where both blue milk and green milk are available for purchase — Coca-Cola is taking things one step further and giving fans a space-inspired beverage they can drink at home.

Coca-Cola Starlight is a brand new limited-time flavor inspired by space. Per a press release via Business Wire:

Coca-Cola Starlight combines great Coca-Cola taste with a dash of the unexpected, including a reddish hue. Its taste includes additional notes reminiscent of stargazing around a campfire, as well as a cooling sensation that evokes the feeling of a cold journey to space.

“Thirty-five years ago, Coca-Cola partnered with NASA to become one of the first soft-drinks to travel to space,” Vlad said. “That same passion for space still exists today. With Coca-Cola Starlight, we wanted to celebrate the remarkable ability of space exploration to inspire generations to discover new worlds of infinite possibilities. We set out to bring that concept to life through a simple sip, capturing some of the mystery and essence of what we love about space.”

Disney Parks and Resorts serve Coke products — Galaxy’s Edge fans will be familiar with the famous detonator bottles that have become popular souvenirs — so it is possible that Guests will be able to sip on Starlight while walking around Batuu’s Black Spire Outpost.

However, at the time of publication, neither The Walt Disney Company nor The Coca-Cola Company have confirmed whether or not Starlight will be available at Disney theme park properties.

Coke describes itself as:

Are you excited to try Coke Starlight?