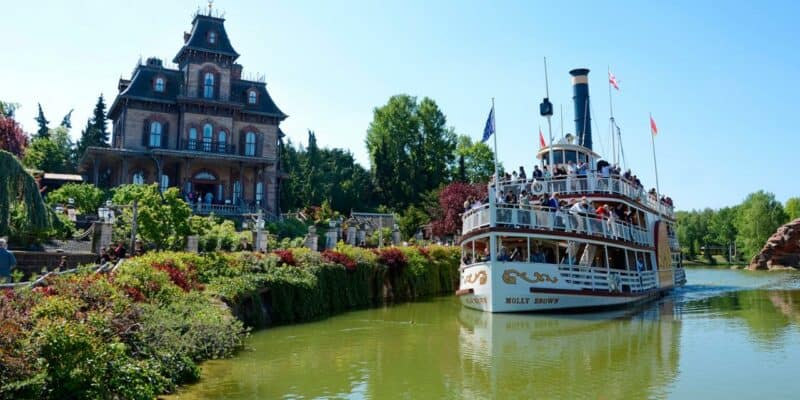 Disneyland Paris had a few attractions closed today for refurbishment. Both Disneyland Park and Walt Disney World Studios Park are currently undergoing some big changes. The 30th anniversary is around the corner for Disneyland Paris Resort, which is why so many of the attractions, the classic Disneyland Hotel, and full-on lands such as Fantasyland are being updated. Even Sleeping Beauty Castle has seen a big change.

The Thunder Mesa Riverboat Landing will see the biggest shutdown, and although we do not yet know when the riverboats will set sail with Guests once again, we can see that the closure will last through to March at the earliest. Disneyland Paris has not updated their calendar past then at this time.

Now, thanks to DLP Report (@DLPReport) we can see that the Mark Twain Riverboat from Frontierland has finally left the dry down as the Molly Brown will head in for refurbishment. Now, Guests can look at a tarp-covered Mark Twain boat. It is not certain where the boat will go and if Disney plans to leave it exposed to Guests during the entire refurbishment.

And here is the Mark Twain from Frontierland, temporarily out of dry dock to leave room for the Molly Brown refurbishment

🔧 And here is the Mark Twain from Frontierland, temporarily out of dry dock to leave room for the Molly Brown refurbishment: pic.twitter.com/U0Ba1Ibi8Q

From the looks of it, we cannot tell if the Mark Twain has had any major changes made to it just yet.

Thunder Mesa Riverboat Landing: A New Perspective on Frontierland
Take to the water in one of two majestic 19th Century-style paddleboats, Mark Twain and Molly Brown, and navigate Rivers of the Far West at Thunder Mesa Riverboat Landing. On your journey you’ll take in a whole new view of Big Thunder Mountain and Wilderness Island, witnessing cascading waterfalls along the way. Plus you may even spy some smugglers’ caves.

What rides do you want to see refurbished at any Disney Park?