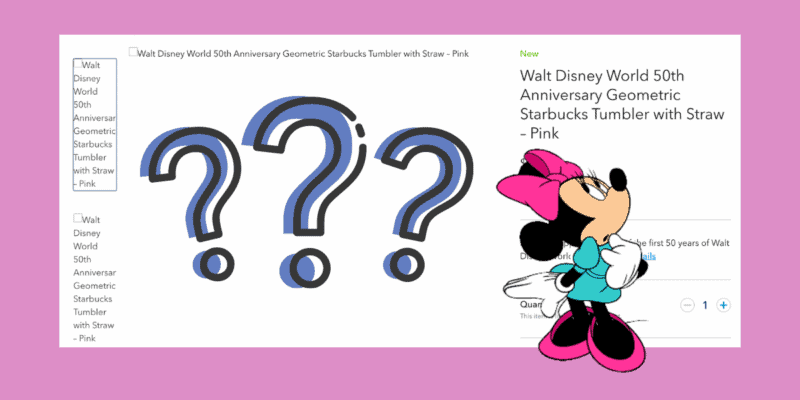 Whereforart thou missing, tumbler? All we want to do is bask in your pretty pink geodesic beauty and claim you for our own… alas, Disney fans across the internet are unable to see the brand new pink Starbucks tumbler in celebration of Walt Disney World’s 50th anniversary. Both shopDisney apps and webpages appear bare due to the glitch plaguing shopDisney.

The newest colorway for the incredibly popular Starbucks tumbler dropped today for online listings at shopDisney. Previously released, the purple Starbucks cup lead to merchandise fights at the Magic Kingdom emporium and then later, internet sales that went quickly. As a result, the purple Disney Park tumbler is no longer available online.

This new Pink Starbucks tumbler is an identical copy of the purple one, but in a new color – perhaps a collectible? As Disney fans loaded shopDisney on their phones and computers this morning in order to purchase the new pink Starbucks tumbler cup, no photos would load. The mini photos for search results likewise showed up blank for this item.

The Starbucks cold cup is currently selling for $49.99, but you may be shopping a bit blind if you don’t know what the reuseable cup looks like. A few pictures exist online, but imagine a duplicate of the above cup… in a light EARidescent pink color. One side features a Starbucks logo, while the other offers a Walt Disney World 50th Anniversary logo.

The online sales listing for the Starbucks Collection, developed exclusively for Disney Parks, is limiting purchasers to two items of each kind, much like the new in-store policy, but that’s not really stopping many scalpers and resellers.

Seeing as the pink Starbucks tumbler debuted physically in Disney merchandise shops in Florida this week, scalpers and resellers are already snapping them up and hawking the marked-up cold cups on eBay. Of course, it makes it easy to spot them when they are listed all over Twitter! This linked tweet by @Disneyana leads to an eBay listing for the pair of Purple and Pink Starbucks tumblers for a whopping $150.00. Shameful.

Of course, shopDisney is no stranger to glitches or issues. When the Minnie Mouse the Main Attraction series debuted in 2020, users were irate with bots snapping up the merchandise, double charges on their credit cards for no merchandise, and just this past month, shopDisney received backlash from fans as they shipped the wrong Spirit Jerseys to customers. As a result, shopDisney completely removed some 50th-anniversary merchandise from the site.

Let’s hope we have an easier time browsing shopDisney in 2022! Can you see the photos on shopDisney, or did you blind-buy the cup? Leave us a comment below!