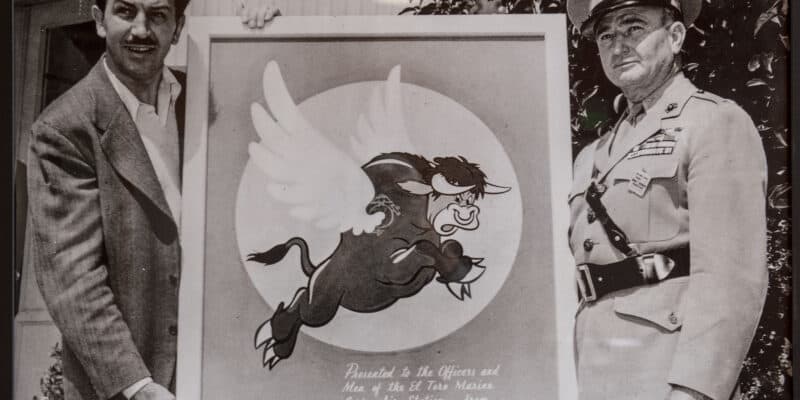 Guests at Disneyland in California and Walt Disney World in Florida can always expect to find something new during their visit, whether it’s a new Hidden Mickey, a different perspective of Main Street, U.S.A., or a newly discovered feature in an attraction line.

For the last year, a unique Disney exhibition has revealed some never-before-seen items and footage for Guests to explore, but this weekend is the last chance for these special pieces of history to be seen.

The exhibition, on view at The Walt Disney Family Museum in San Francisco through January 10, 2022, includes 550 examples of rare historical objects and film clips from Disney’s involvement in World War 2.

As a way to help gather support for the war effort, Walt Disney Studios made several cartoons depicting Donald Duck as a citizen ready to put his life on the line to defend his country.

These cartoons, alongside many uncovered artifacts and squadron insignias, are on display in the museum’s “The Walt Disney Studios and World War II” exhibition.

Many of our readers will know that during the War most production at the Disney Studios was shut down and the military moved into Disney’s Burbank Studios. Inside the Magic went to the exhibition back in December, and was taken aback by how it captures how fast the War challenged Walt Disney’s innovative spirit and ability to adapt to the unexpected.

The exhibit does not allow photos to be taken inside, which truly allows for an immersive and focused understanding of what happened during that difficult time. The exhibit explains how quickly things changed at the Disney Studios, as over 500 troops arrived on-site following Pearl Harbor in 1941.

The Studio’s wartime efforts also increased opportunities for women at the Studios while another display detailed the internment of fellow Americans of Japanese descent including artists Chris Ishii, James Tanaka, Tom Okamoto, Bob Kuwahara, and Iwao Takamoto. The number of projects completed by Disney during the War was done at cost because Walt did not want to be seen profiteering from the War in his support.

None of Donald Duck’s World War 2 shorts are yet available on Disney+, and there is a good chance some never will be on the streaming service. The exhibition was definitely interesting for understanding the production and meaning of these shorts, as well as getting the chance to watch these often controversial cartoons.

Released in 1942, one of these shorts is Donald Gets Drafted, featuring Donald Duck getting swept up in the romanticism of Army recruitment campaigns with his dream of being a pilot in the Army’s Air Corps. His requests are ignored and he is sent to the infantry until Drill Seargent Pete. Beyond the inclusion of guns, there is very little taboo about this cartoon compared to the 1943 Academy Award winner for Best Animated Short, Der Fuhrer’s Face.

Originally titled Donald Duck in Nazi Land but changed to Der Fuhrer’s Face to match the satirical hit song written by Disney songwriter Oliver Wallace, the funny but horrific short follows America’s favorite Duck as he endures a nightmare where he is forced to live in a land where Nazi Germany, Fascist Italy, and Imperial Japan reign supreme. Donald eventually wakes up wearing American flag pajamas, hugs his miniature Statue of Liberty, and says “Am I glad to be a citizen of the United States of America.”

Other areas of the exhibition at the Walt Disney Family Museum include sections about troops and wartime manufacturing, story sketches from Saludos Amigos (1942) and The Three Cabelleros (1944), and a whole room dedicated to the special insignias and patches Disney designed for military squadrons during the War.

Walt Disney Studios created over 1,200 military insignias for all branches of the service. They would create these upon request from the unit, using the large cast of Disney characters from Mickey Mouse to Dumbo.

Our favorite tidbit was the “almost-partnership” between Walt Disney and Roald Dahl in the creation of a Gremlins cartoon based on Dahl’s first published story. Dahl, a member of the Royal Air Force, wrote a story concerning mischievous mythical creatures, the Gremlins of the title, often invoked by Royal Air Force pilots as an explanation of mechanical troubles and mishaps. The females were known as Fifinellas, and the Women Airforce Service Pilots (WASP) adopted Fifinella as their mascot.

The Walt Disney Family Museum shared a post on social media today, warning fans that the exhibit is closing soon:

Time has flown by like Donald Duck riding a Consolidated PBY Catalina flying boat—this is the last weekend to visit our special exhibition The Walt Disney Studios and World War II. What will you miss most about this exhibition?

Time has flown by like Donald Duck riding a Consolidated PBY Catalina flying boat—this is the last weekend to visit our special exhibition The Walt Disney Studios and World War II. What will you miss most about this exhibition? pic.twitter.com/6bt94gufCY

When Walt Disney received word that the Disney studio lot in Burbank had been requisitioned as an Army anti-aircraft base after the bombing of Pearl Harbor in 1941, he and his staff pledged to support the war effort without hesitation—and without profit. This original exhibition illustrates how the The Walt Disney Studios devoted over 90% of its wartime output to producing training, propaganda, entertainment, and public-service films, publicity and print campaigns, and over 1,200 insignia, while also deploying a group of talented artists, including Walt Disney himself, to Latin America on a Goodwill Tour.

During this unique period in animation history, The Walt Disney Studios functioned as a morale-builder for both the civilian public and deployed Allied troops. Walt knew that cartoons would be an ideal medium for communicating with the American people—in an uncomplicated and amusing manner—about war-related issues and anxieties. In addition to the short films and military insignia produced, Disney characters appeared in a variety of home-front initiatives, from advertisements, magazines, and stamp books, to government posters promoting tax payment, food recycling, rationing, war bond sales, and farm production. The exhibition includes 550 examples of these rare historical objects and film clips.

Commemorating the 75th anniversary of the end of World War II, The Walt Disney Studios and World War II will be on display in the Diane Disney Miller Exhibition Hall through January 9, 2022. A new insignia designed exclusively for this exhibition by Mike Gabriel features Donald Duck dressed as a pilot holding onto the wings of a Consolidated PBY Catalina flying boat while soaring over the Golden Gate Bridge. This boat was commonly seen in the San Francisco Bay during World War II.

The Walt Disney Family Museum provides free admission to the museum and this exhibition year-round for active and retired military personnel and their spouses and dependents with valid ID.

Have you visited The Walt Disney Studios and World War II exhibition? What was your favorite part?