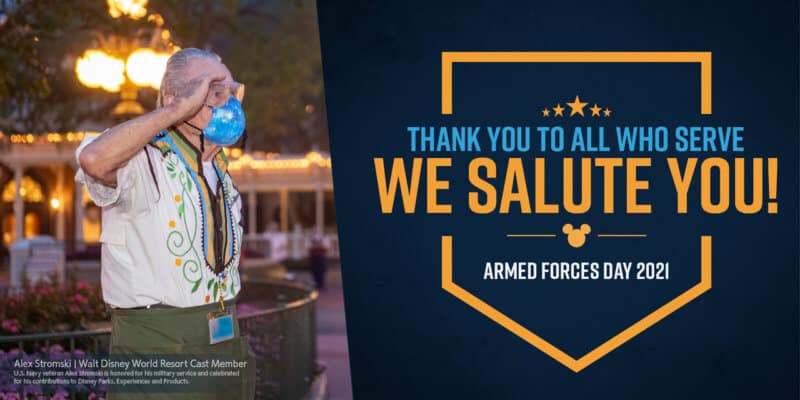 Tomorrow is Armed Forces Day, a day when we honor all members of the armed forces — veterans and those actively serving. To recognize this day, Disney is taking the time to honor a very special Cast Member. Alex Stromski is a Cast Member who is currently serving Guests at the Magic Kingdom but also served his country in World War II.

Armed Forces Day celebrates and honors all members, past and present, of the armed forces. This includes the Army, Navy, Air Force, Space Force, Marines, and Coast Guard.

Disney held a special event to honor the Stromski, who now works at Pinocchio Village Haus in Fantasyland at Disney’s Magic Kingdom Park. Disney Parks Blog wrote about the event:

Recently, with Cinderella Castle looming through a lingering pre-dawn fog, Magic Kingdom Park hosted a special sunrise flag-raising ceremony to thank Alex for his service to our nation and to our company.  As friends and family looked on, he joined the Magic Kingdom flag detail in hoisting the colors over Town Square. Afterward, he and his family were recognized by park leadership and members of Disney’s SALUTE Veteran diversity group.

Alex enrolled in the military at the young age of 17 to follow the path of a friend who had served in the military between the first and second World Wars. He later went to flight school at the Naval Air Station in Florida where he was classmates with the future history-making astronaut, Neil Armstrong.

Alex worked in several areas of the Navy during his service. He worked with experimental naval aircraft, including dirigibles. He was also responsible for helping keep the peace in the demilitarized zone at the end of the Korean War. Alex retired from the military in 1967.

Throughout his life, Alex always had a deep love for Disney and frequently visited the theme parks with his family after Disney World opened in 1971. A combination of his love of service and his love of Disney led him to apply for a job at The Most Magical Place on Earth. Alex told Disney:

“I loved how Walt had great respect for the military…I realized that this was something I wanted to be a part of, so I applied and got a full-time job at Pinocchio’s Village Haus in 2013.”

One of Alex’s favorite parts of his job is interacting with his fellow veterans and active service members.

“I love helping create the experiences that families will remember for years,” he said. “I especially enjoy meeting the military families and veterans who visit us.”

In honor of Armed Forces Day tomorrow, we’re remembering and honoring everyone who has served our country. We’re also shining a light on a special Disney cast member who served in the military during a pivotal time in U.S. history. Learn more about U.S. Navy veteran Alex Stromski and his journey on the Disney Parks Blog (link in bio).

Please join us as we send a big “Thank You!” to Alex and all the former and active members of the United States Armed Forces!

Are you a member of the Armed Forces who loves Disney as much as Alex? Let us know in the comments!