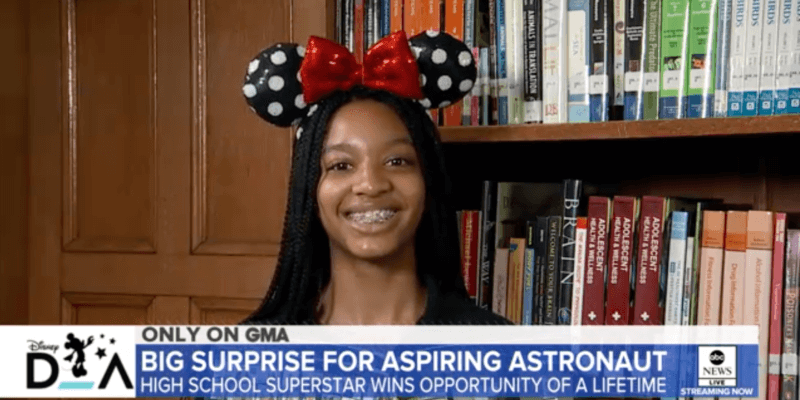 A teenager from New York City has always dreamt of being an astronaut and now her dreams may come true as she just found out she is the latest student to be honored with “the opportunity of a lifetime” by The Walt Disney Company.

Myah Mitchell, who is a student at The Mary Louis Academy in Queens, just found out that she has been accepted into Disney Dreamers Academy.

Thursday morning, Keke Palmer entered Myah’s classroom, and right in front of her teachers, principal and classmates, she showed the aspiring teen a video clip.

The video included a taped message from one of Mitchell’s idols, Dr. Mae Jemison, who was the first African-American woman in space, who was the one who told Myah she has been accepted into the program.

You can watch the full video of Myah being accepted here.

The Disney Dreamers Academy which was founded in 2008, helps ambitious young people, ages 13-19, gather the tools to help make their dreams come true.

The Disney Dreamers Academy is a four-day event for 100 select students and takes place at Walt Disney World Resort in Florida. It is hosted by The Walt Disney Company, as well as entertainer Steve Harvey and ESSENCE magazine.

The Dreamers who get to partake in this once-in-a-lifetime-opportunity get to interact with Disney Cast Members, celebrities, industry experts and community leaders through inspirational talks, immersive career activities and networking and interviewing experience.