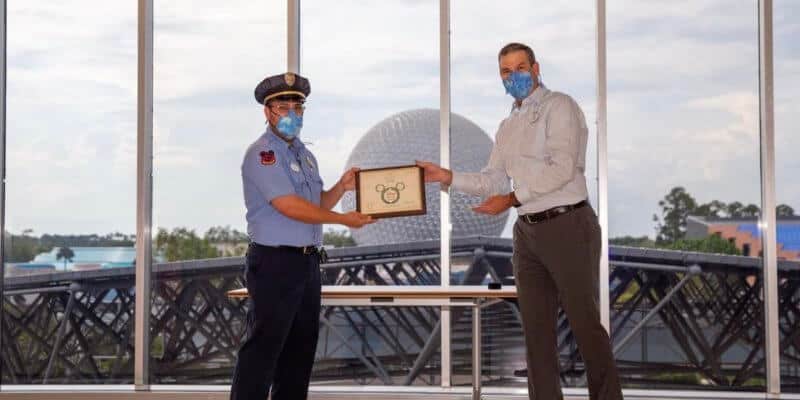 Walt Disney World is known widely for being the Most Magical Place on Earth and the place where all dreams come true. But what happens when the unthinkable occurs and someone’s life could be at stake?

Well, one Cast Member at EPCOT had to act fast and respond to an emergency quickly in order to prevent a major tragedy.

Related: How to Avoid Crowds at EPCOT on Your Next Walt Disney World Trip

In December 2020, EPCOT Security Cast Member Joe Diaz had to spring into action to save a four-year-old before more assistance arrived on the scene. Thanks to his heroic actions, he managed to save the child’s life and is now being recognized for his bravery.

On his way home last December, EPCOT Security Cast Member Joe Diaz leapt into a pond, entered a partially flooded car, and kept a trapped four-year-old’s head above water until emergency teams could arrive and free him. This week, it was my honor to join Vice President of Security, Linda Reid and Vice President of EPCOT, Kartika Rodriguez in recognizing Joe with the Disney Heroes Award, given to Cast Members who save a life or prevent serious injury. What an amazing individual!

Amazing is right! We love to see exceptional Cast Members continuing to create magic and keeping everything safe for Guests, even during unforeseen circumstances and emergency situations. Especially after enduring such a difficult year of furloughs due to the global pandemic, it’s great to see Cast Members back and making magic for all.

Related: After Layoffs and Furloughs, Most Disney World Cast Members Have Returned

What do you think of this Cast Member and his heroic act? Let us know in the comments!

Planning a vacation to Walt Disney World’s EPCOT soon? Let Academy Travel help you plan the most magical vacation ever!