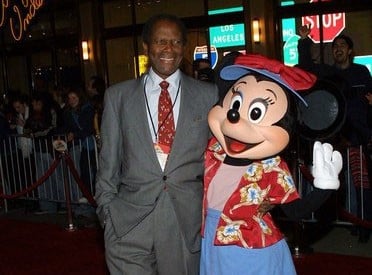 It is a sad day for Hollywood.

Movie legend and pioneering actor Sidney Poitier has passed away at the age of 94 in the Bahamas.

Hollywood’s first Black movie star and the first Black actor to win the Best Actor Oscar, Poitier was best known for his movies Guess Who’s Coming to Dinner (1967) and In the Heat of the Night (1967), winning the Academy Award for his role as Homer Smith in Lilies of the Field (1963).

Clint Watson, press secretary for the Prime Minister of the Bahamas, confirmed to CNN that Poitier died Thursday evening.

Sidney Poitier had a big role at Disney, being named to the Disney board of directors on November 22, 1994, filling the vacancy caused by the death of Frank Wells. Poitier remained in the role until 2003. He also presented Julie Andrews with her Best Actress Academy Award in 1965 for her starring role in Mary Poppins (1964).

Academy Award winner Poitier, who was born in the U.S. but grew up in the Bahamas, broke multiple racial barriers in his decades-long career, including his momentous Best Actor win at the Oscars for playing a laborer who helps a group of White nuns to build a chapel.

One of his most memorable roles in Guess Who’s Coming to Dinner depicted an interracial couple at a time when many U.S. states still had laws prohibiting interracial marriage.

Best Actor winner Poitier overcame an impoverished background to achieve his success in Hollywood at a time when roles for Black actors were rare. The groundbreaking actor was born on February 20, 1927 to Bahamian tomato farmers and moved to New York when he was 16. He started his career with the American Negro Theater and five years later would go on to star in his first feature film No Way Out about a doctor confronted with racism by a white patient he is working to save.

The late acting icon learned to read to get into movies, with the 2004 biography of the star, “Sidney Poitier: Man, Actor, Icon”, telling the extraordinary story of how Poitier learned to read for his first-ever foray into acting.

During his long and inspiring career, Poitier received many accolades, including the Presidential Medal of Freedom in 2009 presented by President Barack Obama. He was also knighted by Queen Elizabeth in 1974 and in 2021 the Academy Museum for Motion Pictures named their new 10,000 square lobby after him.

Poitier had four daughters with his first wife, Juanita Hardy: Beverly, Pamela, Sherri, and Gina. He later married actress Joanna Shimkus in 1976 and had two more daughters Anika and Sydney, who is herself now a successful actress.

Tributes have been pouring in for the late star, including from former Disney CEO Bob Iger:

Former @disney  board member Sidney Poitier was the most dignified man I’ve ever met. Towering…gentle…passionate…bold…kind…altogether special.

The Lion King (1994) and Sister Act (1992) actress Whoopi Goldberg also paid tribute to the actor, posting a heartfelt message to her Twitter page:

If you wanted the sky i would write across the sky in letters that would soar a thousand feet high.. To Sir… with Love Sir Sidney Poitier R.I.P. He showed us how to reach for the stars

If you wanted the sky i would write across the sky in letters that would soar a thousand feet high..
To Sir… with Love
Sir Sidney Poitier R.I.P.
He showed us how to reach for the stars

Our thoughts are with the Poitier family during this difficult time.