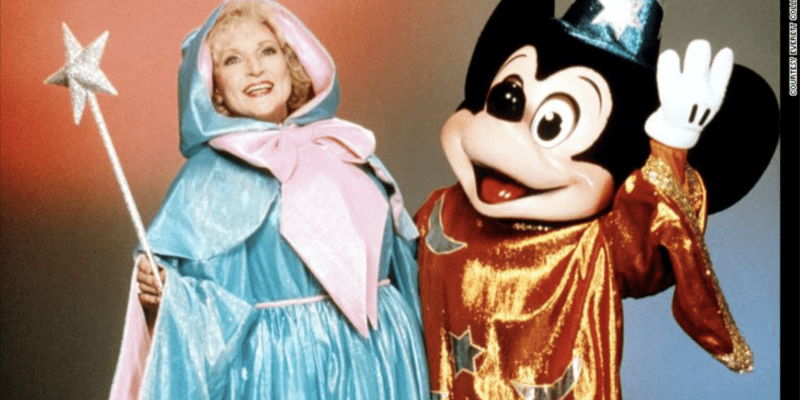 Our beautiful Betty White would have joined the centenarian club on January 17th, 2022, turning 100 years old. She passed away peacefully in her home, reports say, at age 99 on the morning of Friday, December 31, 2021. Almost eligible for NBC’s Smucker’s Jar, Betty White built up an amazing Curriculum Vitae, including Disney projects, hit sitcoms, cameos galore, and even a children’s Golden Book.

D23 sums up her career (which started in 1939) effortlessly, including all our favorite projects as well as historical tidbits we learned,

The six-time Emmy Award®-winning actress was born Betty Marion White on January 17, 1922, in Oak Park, Illinois, and raised in Southern California. After hosting a local television show, she formed her own production company in the early 1950s with producer Don Fedderson and writer George Tibbles. The partnership led to her debut comedy series, Life with Elizabeth, for which she won her first Emmy® in 1952. Betty then became a mainstay on variety and game shows and was a much-in-demand regular with Jack Paar, Merv Griffin, and Johnny Carson. Betty then appeared on The Mary Tyler Moore Show in its fourth season, and her legendary star turn as the man-hungry Sue Ann Nivens brought her two Emmys for Best Supporting Actress, for the years 1974-75 and 1975-76.

Equally, if not more beloved, was her spirited performance as Rose Nylund on the critically acclaimed and breakout hit The Golden Girls (1985-1992), for which she was nominated seven times for an Emmy, winning one in 1985. Who can forget her rambling soliloquies about her curious hometown of St. Olaf, Minnesota, which perpetually left her roommates flummoxed but had viewers at home laughing to the point of tears?

As far as the Disney section of Betty White’s repertoire goes, she voiced Mrs. Claus in the 2010 ABC holiday short, Operation: Secret Santa. Mickey’s newest illustration style cartoons had an episode entitled, New York Weenie, where White lend her voice as a cameo.

A more recent feature film appearance in 2009 was in Touchstone Pictures’ film, The Proposal, where she played Grandma Annie alongside Sandra Bullock.

Betty’s voice has become so iconic, she was hired to voice over the English dub of  Studio Ghibli’s Ponyo. The next year, she played Grandma Bunny in You Again (2010).  She even voiced Hestia in the Disney Renaissance Age Hercules animated series (1998-1999), and can be heard as the voice of the baby chew toy, Bitey White in Toy Story 4 (2019). Her name is an obvious pun on her personal name.

Betty was inducted as a Disney Legend in 2009 in the television category. She was 88 at the time, posing with Minnie Mouse and receiving her award and plaque, which was presented alongside the other Golden Girls co-stars plaques (Rue McClanahan, Estelle Getty, and Bea Arthur), which are displayed at the Team – Disney Michael D. Eisner Building.

According to Disney Tips, we learn that Betty White was also an accomplished author, and her books do good turns:

“She is the author or co-author of five books, and in 2006 was honored by the City of Los Angeles as the “Ambassador to the Animals” for her lifelong work for animal welfare. Betty was honored by the Television Critics Association with a Lifetime Achievement Award in 2009. “You can’t get rid of me,” she joked at the ceremony. “I just won’t go away!”

Amongst her costars and fellow actors, Betty White was also known for her humor, ability to pivot, the choice to be kind, and effervescent sweetness. The Good Place actor, Ted Danson, told People Magazine about White,

[…]he even takes lessons from the star on “how to live.” “It’s not like she’s just a bubbly, joyful person. She wakes up every day and chooses to be that way,” The Good Place alum, 68, adds. “I think she leads a very purposeful life.”

We hope that Betty White’s legacy of films and television shows lives on as her character does in our hearts. Thank you, Betty, for such a legacy!

What project of Betty White’s last 100 years is your favorite? Leave us a comment below!