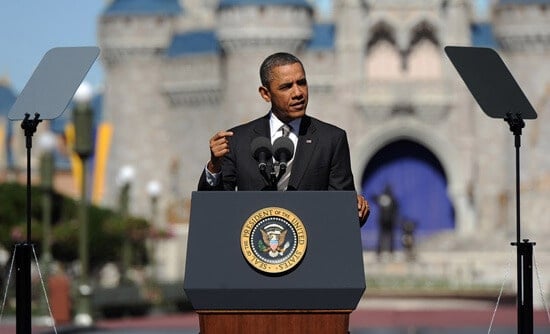 Nowadays, when we hear that someone was kicked out of a Disney Park, it is typically due to a Guest breaking the rules or acting out with poor behavior. Interestingly, even some of the most influential people in the world have had an infraction with the mouse!

Related: Hall of Presidents Closes For Refurb, President Biden to Be Added

One instance of a big name being removed from Disneyland Resort is when former United States President Barack Obama was kicked out of the park.

I know what you’re thinking, “Obama got kicked out of Disneyland?! What did he do?” Well, let us just preface this by noting that Obama’s mishap was quite small, and it is something he is able to look back at and laugh at now!

According to the OC Register, former United States President Barack Obama was kicked out of Disneyland “as a student at Occidental College for smoking in a gondola on the Skyway attraction.”

Considering the Skyway closed in 1994, we can see that this happened quite a while ago, specifically, in the early 1980’s.

During an Anaheim political campaign stop in 2018, Obama noted:

“I’m ashamed to say this, so close your ears young people, but a few of us were smoking on the gondolas. These were cigarettes, people,” he clarified to a bit of laughter.

It seems that Disney security was waiting for Obama and his friends as they got off the Skyway.

“There’s these two very large Disneyland police officers and they say, ‘Sir, can you come with us?’” Obama recounted. “They escort us out of Disneyland. This is a true story, everybody,” he continued. “I was booted from the Magic Kingdom.”

The running joke even pulled in another former Disney CEO, Michael Eisner, who wanted to make it evident that he was not the one to kick Barack Obama out of Disneyland. Eisner stated:

“Just to be clear. I was not CEO Of Disney when Barack Obama was at Occidental College and was ‘booted’ out of Disnyland for smoking a cigarette. Knowing he was going to be President, I wouldn’t do that :)”

Since this incident in the late 1980s, Obama has been back at various Disney Parks. He even spoke at Disney World’s Magic Kingdom in the past! To watch that address, take a look at the video below.

If you want to see a list of many infractions that can have you removed from Disney, click here.

What do you think of Barack Obama’s rebellious act at Disneyland?