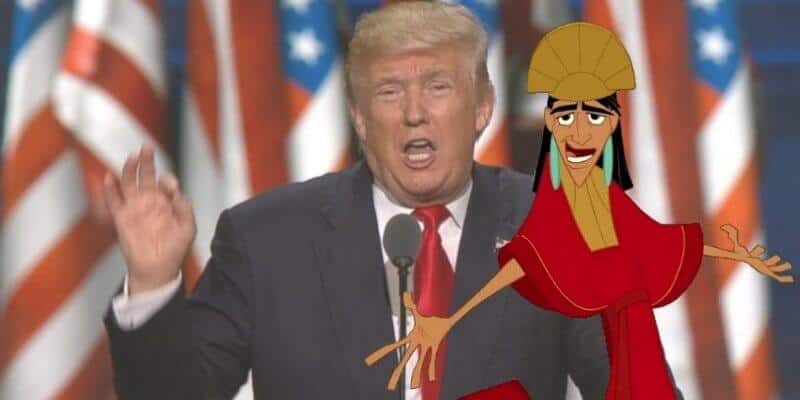 The 2000 Disney animated film, The Emperor’s New Groove, is considered to be one of the most underrated films by many Disney fans and movie lovers everywhere.

The film follows the main character, Emperor Kuzco, as he is transformed into a llama by his advisor, Yzma. Because no one knows who he really is, he is stranded in a jungle alone with his only chance of reclaiming his title of Emperor is by getting help from one of the town’s peasants named Pacha. The duo must get Kuzco back to the throne before Yzma tracks them down and kills them both.

Kuzco is very selfish at the beginning of the film, only caring about himself and treating others very poorly. So who was the inspiration behind this main character? Well, the creators have released some information regarding the animated movie, which gives us a bit of insight.

Vulture just released an article on the “oral history of The Emperor’s New Groove”, which dives into the history of the underrated film, including the inspiration behind some of the characters in the animated film.

It’s embarrassing to say now, but we actually said, ‘What if you took Donald Trump and put him on a farm in Nebraska? What would that be like?’

And why did he pick Donald Trump? Well, Hahn explains that Trump was the only guy they could think of that was “out-of-control”.

Because Donald Trump was the only guy we could think of that was this vain, out-of-control guy.

Also within the Vulture article, the creators discussed a never-released documentary on the making of the animated comedy, The Emperor’s New Groove, titled The Sweatbox, which you can read more about here.

Arrogant young Emperor Kuzco is transformed into a llama by his power-hungry advisor — the devious diva Yzma. Stranded in the jungle, Kuzco’s only chance to get back home and reclaim the high life rests with a good-hearted peasant named Pacha. Together, they must return Kuzco to the throne before Yzma tracks them down and finishes him off.

Are you surprised to hear that Kuzco was inspired by Donald Trump? Let us know in the comments below.