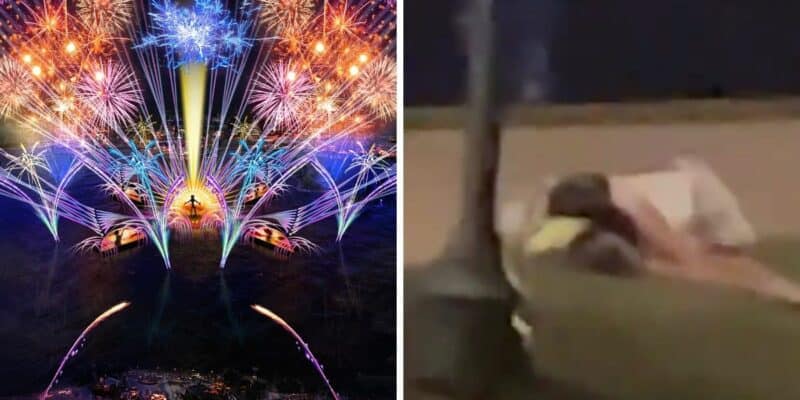 A Disney Guest potentially had a lot going on last night during EPCOT’s Harmonious showing. A lady was seen laying on the grass in a sleeping-like position on the sidewalk path between EPCOT’s Boardwalk area and Disney’s Hollywood Studios around 9 p.m. last night.

On Wednesday, January 5th, 2022, a Disney Guest on his way out of Disney’s Hollywood Studios was catching the EPCOT Harmonious nighttime spectacular from afar. However, while looking upon the Skyliner as well as the Walt Disney World Swan Hotel, he filmed a panoramic view and spotted another Guest passed out on the grass.

Twitter user Drew is a self-described “plain pasta connoisseur” and had a wild night at the Florida theme parks last night. Not only did he witness a full-out brawl in Toy Story Land at Disney’s Hollywood Studios, but on his walk out of the Park, witness a Disney Guest fully passed out in the grass.

Drew supposes in his video caption that she had been “over-served” but later noted that Security and Cast Members were following her to assure her safety. We hope she got back to her room well enough and feels good today!

Disney has been ground zero for some wild activity in the last year, from the Magic Kingdom emporium merchandise fight to the ground wrestlers filmed in Toy Story Land. Line jumping has also been the cause for tense moments in Disney World Resort attraction queues, but also disembarkation areas of rides have been the scene for altercations, as emotions have been running high in the last two years.

While everyone wants to have a relaxing and fun time on their Walt Disney World vacation, we remind Guests to pack a bit of patience and a measure of responsibility as they venture to Orlando, Florida. If you need help navigating all the new ins and outs of the Disney theme parks (it can be overwhelming now), simply call on the travel professionals at Academy Travel. They are hEAR to help!

Did you spot any of the wild goings-on last night at the Walt Disney World Resort theme parks? Leave us a comment below!

Comments Off on Disney Guest Passes Out on Property Sidewalk