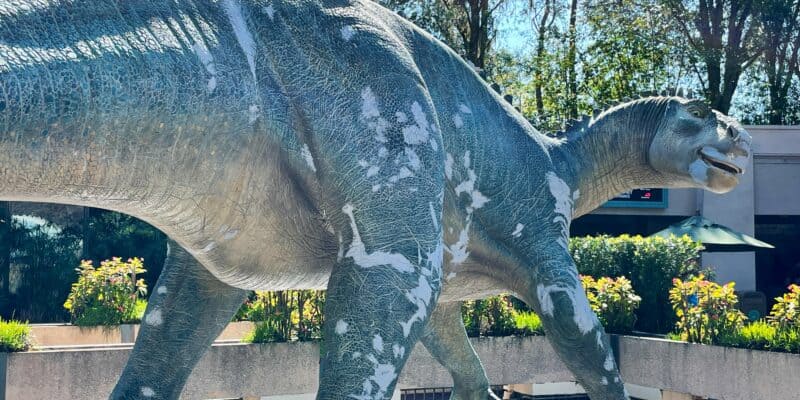 The DINOSAUR ride — which was originally called Countdown to Extinction — can be found in the DinoLand, U.S.A. area at Animal Kingdom. There are been talk lately on a possible retheme coming to the attraction, especially when Disney seemingly pulled the merchandise from the stores.

Although there has been no confirmation of a retheme at the time of publication, it seems Disney is giving up on giving the ride any attention as the iconic dinosaur statue is falling apart.

DINOSAUR opened in 1998 at Disney’s Animal Kingdom, and ever since, it has drawn the attention of Guests as they are eager to travel back in time and “get that dino.” Although many fans still have a love and appreciation for DINOSAUR, some Guests feel the ride is a bit dated.

This has sparked multiple conversations amongst fans, speculating a possible retheme may be coming. Even though Disney has not confirmed if a new IP will replace Dinosaur, it seems that Disney isn’t giving DINOSAUR as much attention as the iconic statue out front is looking a bit dismal.

Alicia Stella took to Twitter to share a photo of the dinosaur in its current state, which is not good.. She writes:

When you forget to rub in the sunblock

When you forget to rub in the sunblock pic.twitter.com/q3D2y8gtIR

The paint is clearly chipping away and the dinosaur is not in a good condition by any means. We are unsure if Disney plans to repaint the dinosaur in the near future, but we sure hope so because that poor dino looks to be suffering.

It is also possible Disney is not planning on repainting the dinosaur if they are, in fact, thinking of retheming the attraction in the near future. Some IPs that could possibly replace Dinosaur include Raya and the Last Dragon or National Geographic. But again, we want to make it very clear that Disney has not announced a retheme for DINOSAUR at the time of publication.

Do you think Disney will retheme DINOSAUR? Let us know in the comments below.