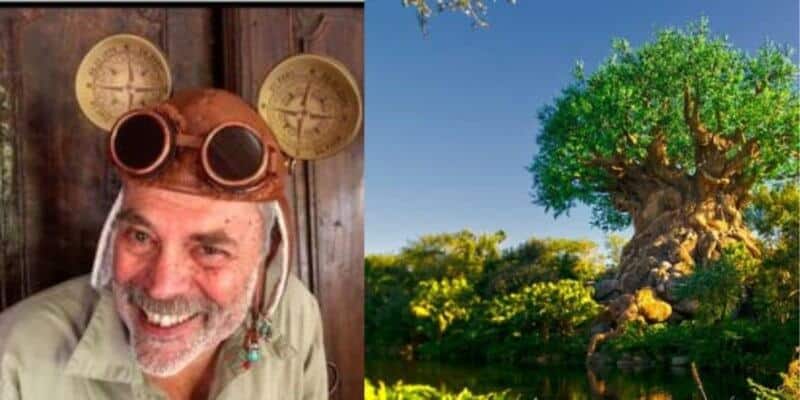 Today, Disney Imagineer Joe Rohde still pays tribute to Earth Day and this gorgeous theme park birthday, stating that well after retirement, it “will always hold a special place in my heart”. On Instagram he writes,

Happy Birthday and Happy Earth Day….I may have moved on to retirement and the adventures of being a consultant… But this will always hold a special place in my heart, because it constitutes a large chapter in the structure of my life. All those many long years ago in 1998 we opened Disney’s Animal Kingdom to the world after 8 previous years of design and development. That’s almost half my life. We chose to open on Earth Day because of the meaning and mission of the park. The park is about life, about the natural world and the animals within it, and about our human relationship to those animals in the natural world. It is why we chose a tree as the iconic centerpiece of the park, and why that tree is covered in the images of living creatures. One of the best things about Disney’s Animal Kingdom Is that it is engaged with living things, plants and animals whose lives emerge, grow and change with the park. And, with the cast members whose lives are also engaged with the park. But lastly Animal Kingdom is become part of the lives of the people who have come to the park, some of whom have gone on to become scientists, conservationists, activists, and artists. So it’s nice to be able to celebrate not just something that we, as Imagineers did, but something that you, the guests of Disney’s Animal Kingdom are still doing. Becoming.

The lead designer of Disney Resort, Aulani Resort and Spa, Disney Imagineer Joe Rodhe started out working for the Disney Company in the 80s. His biggest contribution that Disney Guests are all familiar with is Disney’s Animal Kingdom Park.

Joe’s Imagineering work included the Disney attraction Expedition Everest in Disney’s Animal Kingdom and The Tree of Life that towers in the middle of the park and holds over 300 animals throughout the trunk of the tree, which reminds us of the imagination Joe embodies.

Imagineering is a complex career. Disney has continued to surprise and celebrate this unique theme park with nighttime shows including The Lion King Sequence to the Tree of Life Awakenings at Animal Kingdom.

Although we will miss Joe’s continued work throughout the Disney Parks and Resorts, we wish him the best and are inspired that his work will influence the future of Disney Imagineers that have not yet been discovered!

How are you celebrating Earth Day today? What is your favorite work from Joe Rohde? Let us know in the comments below!

Are you heading to Disney’s Animal Kingdom soon and need help planning your next Disney adventure? Our friends at Academy Travel are EarMarked Diamond, click the link for more information!