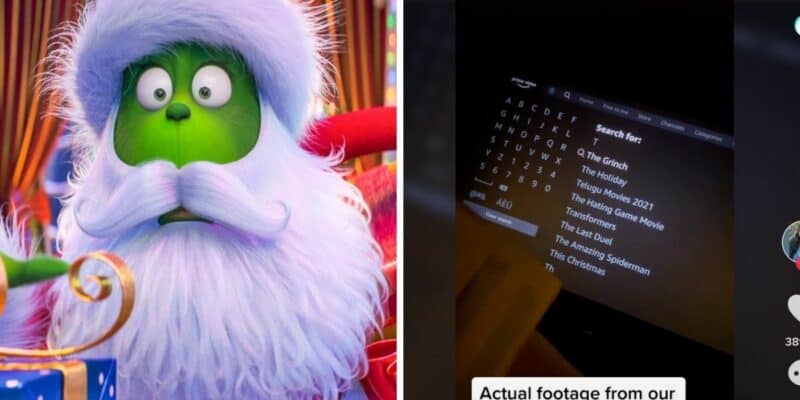 Throughout the COVID-19 pandemic in 2020, the movie theater industry suffered immensely. Now that nearly all theaters have opened back up to fans, however, movie buffs have returned in a big way — especially for Marvel Studios’ latest Marvel Cinematic Universe installment, Spider-Man: No Way Home (2021), which is breaking box office records left and right.

Now, some moviegoers have seemingly been met with an extremely bizarre situation as they tried to watch a film this holiday season. According to a viral TikTok video that was taken at an undisclosed movie theater, the projectionist allegedly attempted to play Universal’s The Grinch (2018) — an adaptation of the classic How the Grinch Stole Christmas (1966) — using an Amazon Prime Video subscription rather than a traditional movie reel.

The video, which has nearly 400,000 likes at the time of publication, features the caption:

“Actual footage from our local movie theater” is written on the video as a user clearly scrolls through Amazon’s video library past a banner for Being the Ricardos and other recent releases.

Related: The Grinch Is Arrested By Police At A Tree Lighting Ceremony

During the video, one guest in the theater can be heard saying “We’re going to be watching this on an old app? Are you kidding me?”

Then, once the Dr. Suess animated feature film is selected, a screen saying “Maximum videos playing” pops up, indicating that the Amazon account is being used to support too many simultaneous movie viewings — likely because all of the theater screens in the presumed multiplex are streaming at the same time.

Although the crowd groans, many people are also laughing at the sheer ridiculousness of the situation. Some commenters on TikTok, however, noted that, although the situation was funny, it was also, frankly, illegal.

A user going by willnavidson wrote, “This is extremely illegal and against Amazon ToS and copyright in general. Also hilarious.”

Another commenter going by lilwheelz68 posted, “Woulda lost it if he pulled up 123movies,” referring to a specific movie pirating website.

More on Dr. Seuss’s The Grinch

The official description of The Grinch reads:

For their eighth fully animated feature, Illumination and Universal Pictures present The Grinch, based on Dr. Seuss’ beloved holiday classic. The Grinch tells the story of a cynical grump who goes on a mission to steal Christmas, only to have his heart changed by a young girl’s generous holiday spirit. Funny, heartwarming and visually stunning, it’s a universal story about the spirit of Christmas and the indomitable power of optimism.

What do you think about this viral TikTok video?