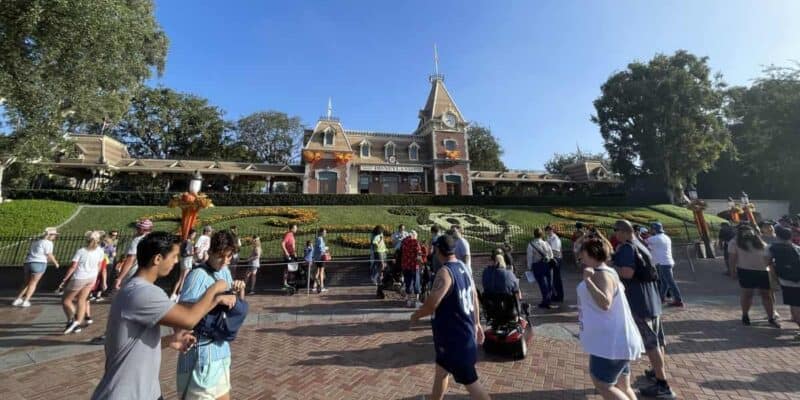 Sadly, even at the Happiest Place on Earth, unfortunate situations can occur. This happened to two friends who recently visited Disneyland Park and were subsequently unexpectedly followed to their car by two Cast Members.

One Disneyland Guest, who wishes to remain anonymous, told Inside the Magic that she and her friend, Jessie (@heyjessiejessie), went live on TikTok at Disneyland on November 29 — each on their own accounts. Typically when these friends go live, they walk around the Park, looking for other friends who are Cast Members just to say hello. Jessie told Inside the Magic:

“My friend and I have a passion for live streaming for hours on TikTok for our followers, especially those who are around the world, can’t attend the Disney parks, or are planning their next trip. We both enjoy live streaming as it brings joy and happiness to our followers.”

During the anonymous user’s TikTok live, comments started coming in from two other Cast Members, who neither TikToker knew.

At first, the two decided to just ignore the comments, but then they realized they weren’t stopping. “They started spamming us,” the anonymous Guest told Inside the Magic. “It was nothing inappropriate, but they just continued to spam us for two hours.”

Jessie told Inside the Magic that they found out these two Cast Members were siblings:

“One of the siblings who was not on duty kept jumping back and forth to both my friend and I’s livestream insisting to meet up with his brother who was on duty at the Disney Park.”

According to both friends, the Cast Members were saying things like “are you going to meet my brother?”, “I can get you in front of the line,” “Wow so are you not going to meet up with my brother,” and “I am waiting for you.”

The two TikTokers kept telling the Cast Members, in the nicest possible way, that they denied their offer and would not meet up with them as neither friend felt comfortable.

Later on in the evening, after the theme park had closed, Jessie and her friend were walking back to their cars when the anonymous user ended their TikTok, but Jessie continued to go live.

“When the Park closed we were at the parking structure and my friend had to go to the restroom. I was still live-streaming on TikTok with 400 viewers and I was having a great time communicating with my followers. I noticed a comment and they said that they want to meet me and say hello before I leave. I said sure and it happened to be the brother who was on duty and insisted on meeting up with him. I did not know it was him or else I would have said no on meeting up for a quick hello.”

According to Jessie, the Cast Member was still in costume and he even said himself that he is not supposed to be here as he could get into trouble. “We quickly said hello and our goodbyes,” he told Inside the Magic.

The anonymous Guest then came out of the restroom and the two began making their way towards their car. As they were going up the escalator, still live on TikTok, they began hearing Jessie’s name being called out by the two Cast Members.

The two friends decided that the anonymous Guest should walk to the car while Jessie held back to try and see what the Cast Members wanted. “I told her to pick me up as soon as she hopped in her car,” Jessie said. They kept saying things like “Why didn’t you meet up with me?” and “I could’ve gotten you into Lightning Lane.”

“Nervously shaking, I started taking a few steps to the car since my friend was not driving and they also were following me from behind,” Jessie explained.

The anonymous Guest eventually picked him up, but the Cast Members were so persistent, they began questioning the friend through the window, who told Inside the Magic at this point she felt “verbally harassed.”

The scary part about this situation is that there was not a high presence of security in the parking structure. They saw one security guard when they first entered the structure, but there wasn’t anyone else in sight, which also made the Guest feel uncomfortable because in a situation like this, they felt as though there was no one to call out to for help.

“While driving [home], my friend started crying in how uncomfortable she felt as they were insisting on meeting up with them and how they both tracked us down during my live stream on TikTok all the way to the parking structure,” Jessie said. “We no do not feel safe going solo to the Parks as of now and livestreaming all the way to our car as we are getting recognized more and more at the Disney Parks because of our social media platforms.”

The two Guests did take this to Guest Relations and spoke with several Cast Members, including management leaders and a security guard who has been working for the company for over 30 years. They reassured the Guests that this is not okay and they will “do whatever they need to do to make it right”, including involving the Anaheim Police Department.

Ever since this unfortunate situation happened, the anonymous user did explain that they have since noticed an increase in Cast Member and security presence at the theme parks, which makes her feel better.

The point of this story is not for attention and not to bash Disney or the Parks. In fact, the anonymous Guest told Inside the Magic that she loves Disney and the Cast Members. But instead, they wanted to bring awareness to this situation as things like this can, unfortunately, happen any time, and anywhere — even at the Happiest Place on Earth.

This is something Jessie echoed as well. “As the Solo Disney Day creator of eight groups on Facebook, it worries me that my members will not feel safe with meeting others or going solo at the Disney Parks,” he continued.

He also told Inside the Magic:

“I always encourage my members on Solo Disney Day to do a solo trip or meet up with other Disney adults in the safest way possible at the Disney Parks to make everlasting friendships. Going solo and or meeting others is very therapeutic and a great thing for one to do. However, after this incident I want everyone to take precautions and meet others in a safe way. I will continue to go solo to Disney Parks and will also continue to livestream in a cautious way.”

These two Guests were, luckily, able to get help by reporting this incident to Guest Relations. If you ever see or experience suspicious behavior, please speak to a nearby Cast Member.