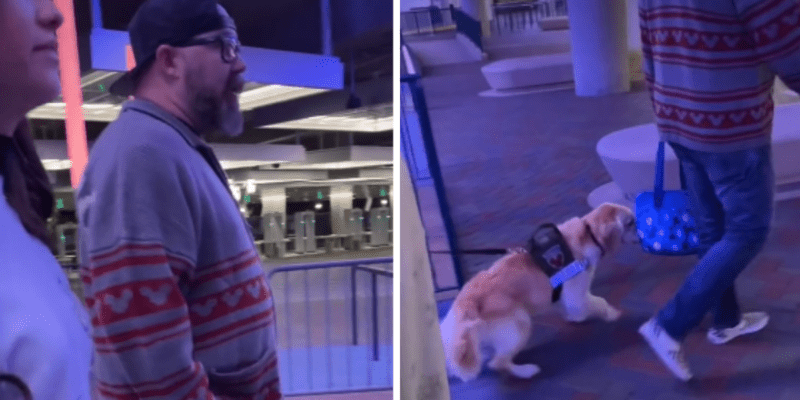 No matter what Disney Park you attend, there are many measures put in place to ensure your safety.

Guests who visit a Disney Park will go through metal detectors and have their bags searched before entry. In addition, special K-9 security units add an extra layer of safety for Guests as they enter the Park.

One Disneyland Resort Guest shared an experienced where they were stopped by a security dog.

Sean Macready (@themaddhatter_) shared a video on TikTok of his experience with a security dog at Disneyland Resort. The video was published just hours ago and already has more than 20,000 likes.

I got stopped by a security dog at Disneyland! #disneyland #disney #CustomersMostLoved #disneyparks #dog #dogsofttiktok

I got stopped by a security dog at Disneyland! #disneyland #disney #CustomersMostLoved #disneyparks #dog #dogsofttiktok

In the above video, Macready explains that his party was approached by Disneyland security and asked if they would like to help by participating in a training. When they agreed, they found out that this training actually had to do with a security dog.

An adorable golden retriever named Hero picked up the scent for what was inside the cooler he was carrying and followed that scent just as she was trained to do. In a real-life situation, this would have alerted Disneyland security and potentially led to dangerous items being uncovered before entering the Park.

To cap it all off, Macready and his party were able to meet with Hero afterwards and give her celebratory pets for doing such a good job.

The security dogs at Disneyland Resort and Walt Disney World Resort undergo intense training and play a vital role in ensuring the safety of everyone at the Parks on a daily basis.

There’s no doubt that Hero will be a great addition to their team and it’s clear she’s well on her way to graduating.

Do you feel safe when you head to Disneyland or Walt Disney World?