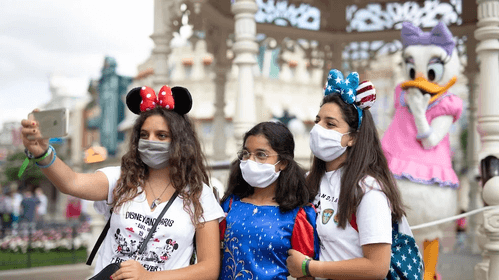 If you are planning on visiting Disneyland Paris in January, be sure to take a look at the theme park’s hours of operation, which will soon experience a massive change.

As we have discussed, Disneyland Paris is going through some new pandemic alterations, at the French Government has implemented new travel restrictions, which has led to Disneyland Paris canceling their New Year’s Eve party.

Following the latest announcements from the French government, beginning Saturday 18 December, regardless of vaccination status, those wishing to travel to France from the UK will need to meet criteria outlined by the French authorities that the travel is essential. Currently leisure travel does not meet such criteria. To see the full list of what constitutes essential travel, exemptions, testing, quarantine and other travel requirements we invite you to refer to official sources for travel requirements.

We continue to provide flexible commercial conditions that you can find here. We are currently experiencing high call volumes, please complete the contact form here, so that we can answer your queries.

If in France, in line with French authorities’ requirements, a Health Pass is required for any guests aged above 12 years and 2 months in order to visit the Disney Parks, the Disney Hotels and Disney Village. Please visit our Health and Safety page for more information on Health Pass, vaccination and testing.

This is a massive change as Disneyland Park is currently open until 10:00 p.m., and Walt Disney Studios Park is open until 8:00 p.m. With these new hours, Guests will have a much shorter theme park experience. This is something that Guests should plan for when they visit. At the moment, we cannot see the hours of operation for the month of February.

What do you think these changes? Let us know in the comments below!