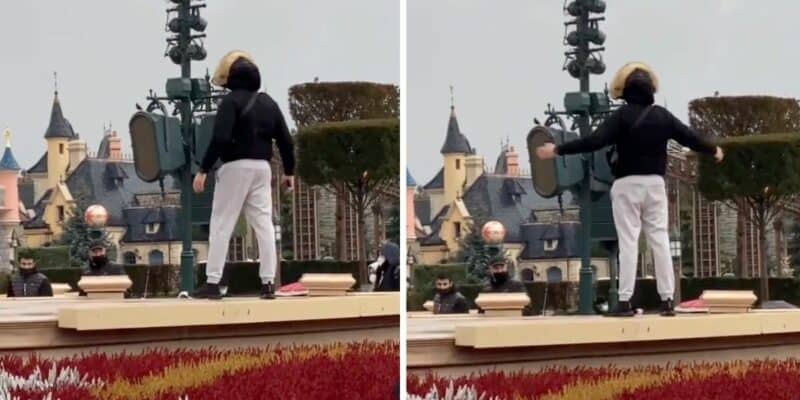 When Guests go to a Disney Park, there are many areas in which they are allowed to explore! From the various lands, to all of the attractions and dining locations, it may take days for one Guest to feel like they have conquered the Park. But, there are also areas that Guests are not allowed in or on.

Of course, all Disney Parks from Walt Disney World Resort to Disneyland Resort and more have a backstage area that is reserved for Cast Members only. There is plenty of signage around that indicates exactly that, and Guests are meant to respect those boundaries. On top of that, there are spots that are “on stage” that Guests are also not meant to be near.

At Disneyland Paris, it seems that one Guest thought that it would be a good idea to jump up onto one of the raised platforms in front of Sleeping Beauty Castle. This spot does not have stair access and is guarded by a green gate, so the fact that this Guest climbed on top means that they would have had to put extra effort into their climb. Considering the area is blocked off and does not allow for easy access should be all the hints needed for Guests to stay away from the staged area, and usually, it is.

DLP GUESTS SHOW (@dlp_guests_show) posted a video of the Guest with their arms wide open, basking in the moment; however, this is a clear violation of the rules. The video is only a few seconds long, but the moment any Cast Member would see this, they would instantly tell the Guest to get down. Failure to do so would likely involve security and removal from the Park.

Please be sure to respect all signage, rules, and regulations when visiting any Disney Park. If there is a sign telling you not to enter, or something looks too difficult to climb and is gated off, be aware that that means you should not try to enter the area, as it is trespassing. Plus, as we can see from the thread on this Tweet, you will not be highly regarded by others for doing so.

Please read the rules and regulations for Disneyland Paris here.

What do you think of this Guest’s behavior? Let us know in the comments below!