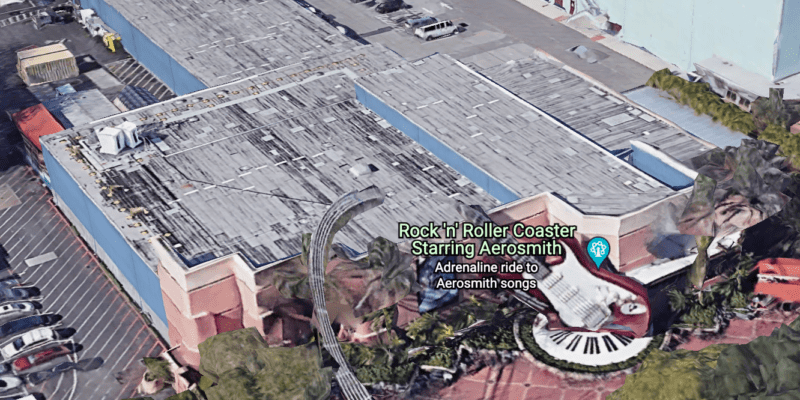 The Disney Parks are extremely creative when it comes to building rides and attractions. And what we mean by that is several rides have massive show buildings where the actual ride takes place, but because of how the show buildings are built, Guests can’t see them from inside the Parks.

Rides such as Haunted Mansion, Pirates of the Caribbean, and Rock ‘n’ Roller Coaster need a lot more space to tell the full story, but utilizing giant industrial-looking buildings are, of course, not pleasant to look at and will take away from the theming that Disney is known for. So, in order to make this work, these show buildings are often hidden from Guests’ views to preserve the Park’s magic.

Even though you cannot see these show buildings while standing inside the Park — you can see them from a bird’s eye view, such as on Google Earth! And one of the rides that we found has a massive show building is Rock ‘n’ Roller Coaster at Disney’s Hollywood Studios.

As Guests enter the queue, it isn’t long before they actually enter the building, which is where many think the ride takes place as well. However, what many don’t realize is that the initial building is actually only home to the queue and pre-show area, but not where the actual coaster is.

In the image below, you can see the first building, located right behind the guitar.

But, if you zoom out, you will notice a second building attached to the first, which is where a majority of the actual coaster is located! You can see this in the image below.

It is so interesting to see just how Disney Parks attractions are built and how Imagineers use massive show buildings to house many of the rides and attractions.

Did you know about this massive show building used for Rock ‘n’ Roller Coaster? Let us know in the comments below.

If you want to visit Disney World to ride Rock ‘n’ Roller Coaster, start planning your trip today with the help of our friends over at Academy Travel!